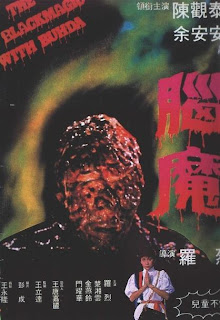 I've learned something today. Evil Thai mummybrains arent something you should mess about with, it's as simple as that. And if you do feel like keeping them for your own personal gain, make sure you feed them regularly. They do tend to get rather mad if they are hungry. Like any other pet really. That's something the protagonist of low budget Hong Kong sleaze Black magic with Buddha learns when he goes to Thailand, takes home a brain with magic powers to use for his own personal gain. You see, our hero is somewhat of a looser. Only somewhat though, for a CAT III hero he is actually fairly likeable. He means well I suppose, he just doesnt seem to think of the consequences of what he is doing, and the fact that it kills his sister and his wifes family, well, he never seems to care that much about it. He comes of as a bit... nice but dim. I dont really know what to make of him, but he's not as cartoonishly evil as they usually are. Anyway, all this leads up to a glorious whopper of an ending full of yuck and gore and as these types of movies go, Black magic with Buddha is on the cheap but nicely weird and energetic, and never boring.

I wish more of these movies would be released on proper dvds, it's a genre that is like on open vein of gold for us gorehounds out there. Black magic with Buddha is a fine example of it, full of sleaze and fun stuff, but has never been released on any proper media. The version I saw was a download, most likely from a horribly cropped vcd where you could not see the first and last words of the subtitles. Fortunately, it is still easy to follow the mayhem on the screen but I would most definately like to have this on dvd. Silly, gory and wonderful entertainment. Thanks to Jack J for writing about this on his lovely blog Backyard Asia.. I stole the picture from him. Shame on me. And shame on Ben for stealing that brain.
Upplagd av Jocke Andersson kl. 08:24