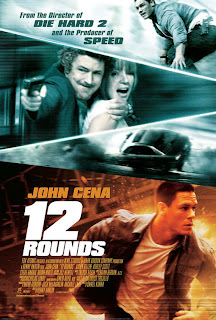 I like Renny Harlin. Most of his movies actually, especially Die Hard 2 and Deep blue sea. I even like his version of the Exorcistprequel a lot.

But this? An actionmovie with a really stupid script and a lead that used to prowrestle. The only redeeming factor is a decent bad guy and one or two ok actionscenes. But no... My girlfriend even forgot that she'd seen it after a couple of days. It's that memorable. 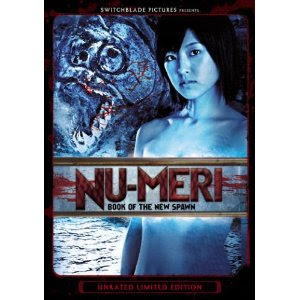 Ok, the first question that popped up in my head after watching this movie was: Who was it made for? Well, me maybe. I do agree to the fact that there can never be enough nasty fishmovies and this sucker rates way above your average syfymovie, both in plot and weirdness. But still, the script needed a bit of tailoring if they really wanted to make an memorable horrormovie.

Our heroine, likes fish. A lot. No, not in any sexual way (put down your dirty mind, just because this is a japanese movie.....) but she wants to study them and help protect them. When she isnt carving them up in the fishmarket of course, where she helpd out her family on a regular basis. She also studies marinebiology and has gotten an internship at a local fishlab, along with a friend. When they arrive strange things start to happen - her friend tends to wake up staring in the night and after she dissapears her body is found in the ocean full of fishbites. Someone is obviously performing unethical experiments on the poor, unsuspecting fish. And then it gets really weird. I dont want to go into any major details to spoil anything, just mention that it involves flying, carnivorous fishheads. Yes. Fishheads.

The only thing is that for a movie that is only 75 mins long including credits, it is pretty dawn slow. Nothing happens until more than half the movie has passed, before that we follow the young girl living her life, meeting friends and praying at any fishrelated shrine she can find. It's almost like one of the narratorless documentaries following the life of a young japanese woman. Not that its totally uninteresting, the actors are decent and it feels fairly unscripted but not very horrormovieish. When the horrors finally come in the end, they are well staged and really creepy as soon as you accept the flying fishheads which are wellmade on an obviously low budget. Actually, the general weirdness of the last 15-20 minutes are more than worth the while. The buildup could have been a little bit... different. Still, I like the movie as it is. Recommended if you like your dope a bit odd. Like me.

Another thing. This is a sequel. To a movie that seems to be about bunnies. In a horrormovie kinda way. Wtf?
Upplagd av Jocke Andersson kl. 22:00 2 kommentarer: 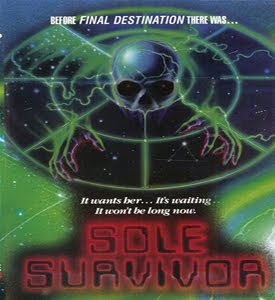 Code Red has shown itself to be a class act when it comes to releasing fine little obscurities with an extra gold star for my two faves, the extremely fun little monstermovie Strangeness and the awesomeness that is Messiah of evil. And here they have struck gold again, perhaps not as rich a vein as the two movies mentioned in the earlier sentence but still, a fine little movie that deserved a decent release.

Here is a fun little obscurity that rates fairly high on the creepiness scale. It is obviously low budget and the acting is rather uneven but the general ambience of the whole thing wins out in the end. Think of it as a mixture of Night of the living dead and James Herberts The Survivor, and then some. We follow a young woman who survives a plane crash, only to be haunted by strange voices and mysterious people who in the beginning only watch her but soon start to kill everyone around her. Enough said about the plot, it is simple but very effective. The movie focuses on mood instead of gore and it is well directed by Thom Eberhart whose debut this was. The acting is maybe the low point, ranging from wooden to ok, but it never detracts from the enjoyment. The general creepiness of all that is going on, from the voices to the people who pop up from time to time just to watch her before turning homocidal and the mystery of why this is happening, something that is subtly laid out by a psychic friend of the lead.

A decent little timewaster, well above average, which is well worth a purchase. And that "Before Final destination... there was... " bit, not really. Some meager similarities maybe, but entirely different movies.
Upplagd av Jocke Andersson kl. 20:20 1 kommentar: 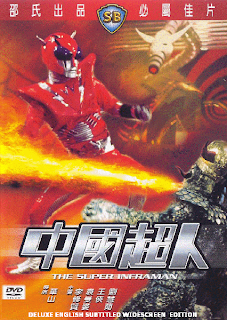 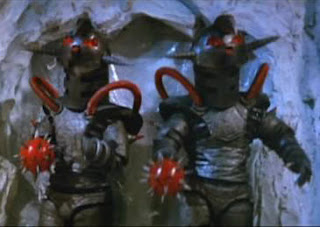 Super Inframan is pretty easy to categorize - It is Shaw Brothers answer to the japanese phenomenon of Ultraman, a concept that very mush appeals to me. Giant men in suits fighting giant monsters. And what a ride this is.

You see, Demon Princess Elzebub rules Inner-Earth from Devil Island. She has decided that she needs the outer Earth too and starts to send out her monsters to conquer and divide. Of course, outer Earth cannot put up with this and has the Science headquarters try to put a stop to the evil Demon princess with their highly trained fighters and the brilliant Professor Liu Ying De. Our hero (played by Danny Lee) is even transformed into a cyborg, the titular Super Inframan who also has the suspiciously Ultramanlike ability to morph into a giant Super Inframan (which they unfortunately only do once). Let the fighting begin! For instance, Plant, my favorite monster of the movie, is some sort of Plantcreature with a skullface that infests the HQ with its giant tentacles. Then we have Mutant drill, who has a drill on one hand and a some sort of hammerish claw on the other. And there is so much more!

Just about the only thing I can complain on is that the numerous fights are all humansized except for one small instance, which means that instead of monsters trashing building in slomo we get hilarious rubbersuited kung fu fights instead. Once you accept that the movie is all straight and pure enjoyment. 90 minutes of monsterfighting, how can you go wrong?

I bought the HK release of this, which means I only got the original soundtrack with subs but for once I'm actually contemplating getting the R1 release just for the hilarious dubbing. This doesnt happen often, I can promise you that.
Upplagd av Jocke Andersson kl. 11:13 Inga kommentarer: 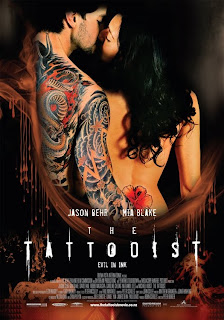 Here is an interesting little flick that somehow never really got the attention it deserved. It's no masterpiece but a decent horrormovie with a good, fascinating story and some fun, bloody grue. Jason Behr plays tattooartist Jake Sawyer who has a strange fascination for tattoos with magical powers, even up to the point that he is sought out by sick people wanting to be cured. When a young boy dies (the father believes that the tattoo was the cause) he flees the country and ends up in New Zeeland, mainly for the interest in the samoan rituals of tatau, a deeply rooted coming of age rite. He steals a tool from a fellow artist but realizes his mistake after cutting himself on it and experiencing some pretty weird dreams. The problem is, the people he has tattooed are beginning to die horribly.

The whole concept of the samoan tattoos and making a horrormovie with it is a winning concept. The first half of the movie is pretty slow, but it is essential for building the story and when things start to happen we are rewarded with some pretty nifty deaths and a good tension all through to the end. Jason Behr makes a good brooder of a hero, and the new zeeland actors are all way above average taking the movie out of some last minutes hokeism regarding christianity and a slightly underpowered ending. A well written and fun horrorflick, well recommended.
Upplagd av Jocke Andersson kl. 19:31 Inga kommentarer: 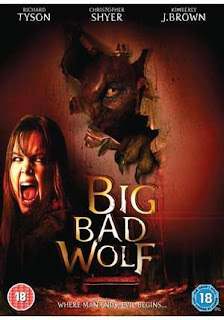 This movie has everything I need. Tits, gore, werewolves, plotdevelopments worthy of a pornmovie! So why does it suck so bad? Ok, maybe I'm exagarating a bit, there are parts of Big bad wolf that are worth watching, but the movie gives you some really nice goodies in the beginning and then forces you to watch 50 mins of dull humdrum until you get anything else, that is a lot for a gorejunkie looking for a quick fix.

Yes, it does start pretty well with a young nerd inviting his sorority "friends" and the tomboy chick he is a bit in love with to a cabin in the wilderness for a party. It doesnt take long before all the teens except our hero and his crush are devoured by a wisecracking werewolf (who sometimes speaks without his mouth moving, and sometimes with his mouth moving). The main suspect is the youngsters stepdad and when a friend of his mom arrives with the same suspicions, a race to obtain some dna is on. How do you obtain dna from a man? Well, our hero's crush gives stepdad a blowjob. Wtf?

If you find this fairly cheap, I would recommend it. It has boobs, intestines and a half a head torn off. As werewolfmovies go, Big Bad Wolf is mostly just corny but still watchable if you are in the right mood.
Upplagd av Jocke Andersson kl. 18:28 Inga kommentarer:

Just lazy and havent watched much movies lately. I am preparing reviews for Samurai Zombie, Big bad wolf and Poultrygeist so expect them to appear in a day or two. But then I have to start watching movies again!
Upplagd av Jocke Andersson kl. 20:43 3 kommentarer: