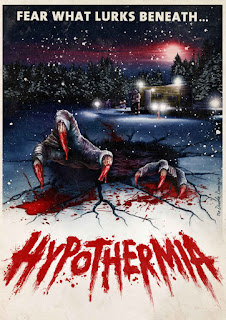 I liked James Felix McKenneys Automatons a lot, a arthouseish lowbudget tribute to old scifimovies and got very intrigued when I heard that he was working on a creaturefeature that was set on a frozen lake. A couple of years later I pop in the dvdrelease of this with great anticipation and soon realize that this too is a tribute to old movies, very obviously Creature from the black lagoon. Complete with one of the worst monstercostumes in the history of filmmaking.

The concept is simple and effective though. Michael Rooker (dependable as always, no matter the clunkiness of the dialogue) is out icefishing along with his wife, their son and the sons girlfriend. Their enjoyment is soon ruined by annoying asshole Steve Cote (doing a perfect impersonation of Jason Sudekis. It's uncanny) and his boy complete with snowmobiles and a trailer stocked full of beer. Before they are able to get to pissed at each other they see a large creature under the ice, possibly a sturgeon of some kind. Well, it isnt. It is, of course, a humanoid fishcreature straight out of a Larry Buchanan movie with razorsharp, poisonous claws and we end up in a quite nice siegesituation on the ice during the night. Too bad about the monster.

I liked Hypothermia, it has a cool plot and the setting is excellent. The second half, when the characters hide out in the trailer with the skulking creature roaming about outside in the dark is full of tension and the script does a decent job with the characters even though some of the dialogue is a bit clunky. The cinematography is excellent, making good use of the location and providing a lot of moody atmosphere. As a monstermovie this isnt bad at all. But, we still have that monster. It isnt really that the design is plain awful, when we actually get to see it in more detail it looks like a lowtech version of the things in Humanoids from the deep, not really outright bad. The problem is that someone made a bad decision when designing it, making it as sleek and slender as possible. Probably a good idea in preproduction but when the creature starts to attack people during the night, we get flashes of something that looks like a guy in a wetsuit or some sort of rubberfetishist. Even though I am a lover of cheapo rubbersuits, this is a bit too silly. It doesnt kill the movie outright but it does lower the score. For once it would have been good to show the cheap monster in all its glory. And then there is that ending. I wont spoil anything, but I will say that it isnt very good. Might've sounded cool on paper but it really isnt.

So, Hypothermia isnt actually bad. There are a couple of nasty flaws but i enjoyed the experience. This is one flick that I really hope gets a remake someday, the concept and story is sound. And it still is better than a lot of syfys creature features.
Upplagd av Jocke Andersson kl. 17:00 3 kommentarer: 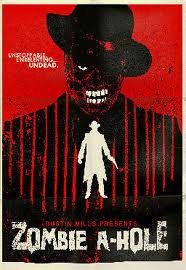 The one thing that impresses me the most about Zombie A-hole is the fact that the filmmakers set out to create their own little universe with their own rules and a general feeling of "I don't give a fuck of what you think is horror". What we have here is a piece of filmmaking that transcends all the retarded little rules that you supposedly have to follow when making horror. This is what we are rewarded with when someone sets out to make something that truly is their own and although limited resources probably held the filmmakers back in their vision, we still get one of the more entertaining horrorcomedys of last few years.


Ok, how to describe the plot in a way that will make you interested in a movie whose biggest flaw is its rather silly title? A zombie dressed in a striped suit roams around killing female twins to gain power so that he can open the gates of hell, all while the cowboy brother of one of the victims joins up with the zombies twin brother to try to stop the titlecharacter before he succeeds with his diabolical plan. Not interesting enough. Ok, here's more. One of the paths that our lovingly drawling cowboy travels down in order to locate the villain is by the use of a mini voodoozombie in a small box, seriously one of the coolest creations I have seen and I am almost willing to deduct points just for the fact that the creature isnt in the movie more! I will admit that the movie is slightly overlong, it could have been trimmed down a bit but still, it is never boring.

And now for the important bits: The gore and the nudity. First of all, having the Zombie A-hole dispatching twins is a brilliant way of maximizing the nudity - almost every soon to be dead female has TWO nudescenes. The violence is cheap and plentiful, just like I want it. In fact, there are almost too many similar scenes where the zombie kills two naked twins, it is repeated so often that it almost feels like lazy scriptwriting. Almost. Who am I to complain about copious amounts of gore and nudity? Shame on me.

Other strong points? The acting isnt half bad, I loved Josh Eals macho drawl as Frank Fulci, the cowboy trying to get revenge for the death of one of his sisters, he does a great job with a lot of hilariously dry dialogue. Brandon Salkil seems to have a blast with his three characters, playing both twins and the twin turned Zombie A-hole. The rest of the characters arent really there long enough to make an impression, they are there to die and that's good enough for me.

In the end there aren't (for me that is) that many negatives. Yes, the movie is 10-15 mins too long, the acting can be a bit uneven and the special effects are one the cheap side (no wonder since the budget was about $3000) but all of this doesnt matter when the filmmakers go out of their way to make this a fun experience. One of my favorite scenes is an early one when Frank Fulci enters an old house to look for the Zombie A-Hole and finds a group of zombie skeletons, all done with miniature puppets. It might sound silly on paper but the sequence is handled extremely well, hooking me 100% and the movie never lets me down after that.

So, in short. Zombie A-hole is a very original and exciting microbudget horrorcomedy that everyone shoudl see. I realize that the low budget of it all might turn some people away, but it's their loss. Suckers. Very much recommended. I just wish that writer/director/editor/cinematographer Dustin Mills would have used that awesome voodoo puppet more. 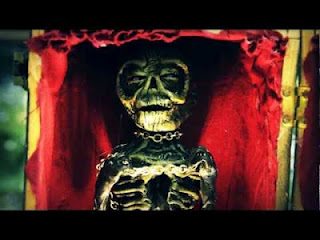