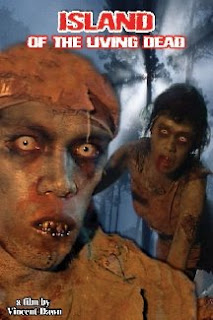 One part of me would like to state that Bruno Mattei was a mediocre, incompetent moviemaker but that isnt really true. His movies are loaded with stolen scenes, bad scripts, lousy actors and dubbing that is out of this world and it is very easy just to point and laugh. But some years after his passing I realize again and again how much I miss him. One of these occasions was his next to last movie, Island of the Living dead, a very old school Italian zombiemovie. No, it is not a good movie. It is stupid, absurd and probably has the worst dubbing I have ever encountered. But when I think back on what Mattei gave us I realize that even though some of his movies were pretty awful, he was still a professional director of an almost lost era. He may have been a bit of an opportunist that went to great lengths to finish his movies, including ripping just about anything off, but the flicks always looked good no matter how stupd the scripts were. I have a little understanding for the fact that some called him the Italian Ed Wood but those people never saw an Alfonso Breccia flick. Another thing, which saddens me greatly, is that with Matteis death, something dear to me is lost. The age of the great Italian exploitation is over. Dead and buried.

Island of the Living dead is a pure and simple zombieflick that looks like it came straight out of a time capsule from 1987. It starts sometime during the 15th century on a Spanish colony in the Philippines where an outbreak of the zombie plague is causing some mayhem. 400 years later we meet a group of horrendously dubbed failed treasure hunters that end up on the very same island we saw in the beginning. The boat breaks down and they all decide to explore while it is being repaired. Yes, the island is full of zombies, the boat blows up when the self destruct device is activated (yes, every boat should have one) and now our heroes are trapped on an island full of ruins and zombies. And some vampirezombiepirates as well.

This is exploitation at its simplest. Made on a very low budget with the previously mentioned awful dubbing and overacting in the extreme, and a script that is about as original as a Joel Silver cop movie. If someone else than Mattei had done this it would probably have been unwatchable but he took it as seriously as he always did and manages to crank out a fun flick (shot on dv but still way better than most flicks in the same ilk. Mattei never forgot how to use a camera well) with decent pacing and always something interesting to look at, be it some cheap gore or some nice ruins. Mattei may not have been the worlds best filmmaker but he cared enough to make his movies entertaining, to give them a bit of heart. Thank you Bruno. We miss you.
Upplagd av Jocke Andersson kl. 09:42 1 kommentar: 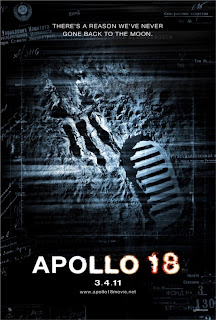 One thing that I find really amusing about this scifi/horrormockumentary is the fact that a lot of people seem to take this very serious and get really upset when they realize that it is a movie. Come on, are you for real? There NEVER was any doubt that this is anything other than a horrormovie and if you took it for real you really deserve to sit in the corner and feel ashamed of yourself.

Ok, this is a mockumentary consisting of "found" footage of a secret trip to the moon, the Apollo 18. They find a russian moonlander and a dead cosmonaut, and something else... the mockumentary concept consists of different handheld cameras and stuff placed in the moonlander and it works wonders. The lunar landscape and the sfx are excellent, making it look like actual footage of the moon itself. Yes, there is a scene or two that makes you wonder "who filmed that?" but never enough to dispel the magic. The acting is great, mainly a twomanshow but the script is good enough to sustain the movie from beginning to end. And the script is why I really love this movie. Yes, I really loved this movie and I dont really understand why the critics have panned it. What were they looking for? What we have here is basically an oldfashioned monstertale, an updated version of the old Outer limits tv-series. A horrormovie set on the moon. With monsters. Cool monsters too. Are all the critics upset over the fact that we never get any big reveal towards the end? That the ending goes a bit towards major cliché but still works?

No, I dont understand anything about the bad reviews this has been getting. From the moment I read about this movie my expectations were skyhigh, and they got even bigger when I saw the trailer. And the movie actually exceeded my expectations! This is a classic piece of old school horror, just the way I want it. I am already looking forward to the dvd/blu ray release so I can watch it again.

Btw, I saw this at a movie theatre in Las Vegas while my girlfriend and her cousin watched some show. We were about five people in a theatre bigger than anything we have in Stockholm, which was pretty cool. And sad.
Upplagd av Jocke Andersson kl. 10:33 Inga kommentarer: 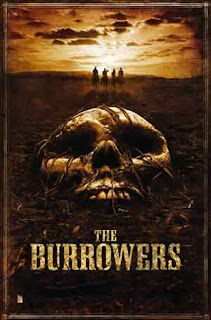 There aren't really enough Western/horrormovies out there, which is truly a shame. You would think that the vast, unexplored plains of the old west would be the progenitor of some sort of weird beastie but so far we havent really had anything worthwile. Until now. The Burrowers, which at a quick glance looks like a Tremorsprequel, is exactly like I would want such a genrehybrid to be.

The movie starts whith a family living in the middle of the plains recieves a warning from their neighbour and hides out in their cellar. Their daughters suitor arrives the next morning only to find that the cabin is drenched in blood and the initial reaction is that indians are responsible. A group of gunslingers and some soldiers form a searchparty, but while the soldiers firmly believe the culprits to be indian, the other soon start to suspect that something entirely different is lurking. They split up and our heroes soon find a young woman buried in shallow earth with a strange wound in her neck, seemingly in a coma but they realize that the girl is still alive. She is very very paralyzed and they send her away with one of their own to find a doctor and start to follow some mysterious tracks in the wilderness. Yes, no injuns here. This is something that the indians themselves are afraid of.

I should "warn" you here, The Burrowers is a methodically slow movie which means that everyone that has grown up on Michael Bay will most likely either stop watching after half an hour or fastforward through it. Your loss. The slow pace is actually perfect for this type of movie, slowly moving forward with the plot to maximize the doomsdayish mood that grows stronger every minute as the characters discover what they really are up against. The script has brains, keeping a fine line between who is a good guy or a bad guy which really suits the movie well. They actually feel like real people. It is always nice when a movie tries to avoid clichés and the creators of this movie do an excellent job. Another strong point is the cinematography, capturing the beauty of the american wilds while still maintaing that cool feeling of dread and unease that you want to find in a good horrormovie. J.T. Petty, whose previous credits include Mimic 3, seems to know exactly how he wants everything here and I am looking forward to seeing what he does in the future, although I am not really sure if reworking Faces of death into a fictional narrative is such a great idea, at least if Wikipedia is correct. We'll see. Back to the Burrowers. If you want ensure the quality of a good script you populate it with a group of excellent character actors and here we have names like Clancy Brown, Doug Hutchinson and William Mapother, all doing what they always do, kick some acting ass. And then we have The Burrowers themselves, awesome creations that we do not really see that much of, exactly like it should be. We never really find out any major details about them, only enough to start to fill in the empty spaces ourselves, to enhance the fear they strike into you.

This is an excellent movie, with just the right amounts of horror and gore which I recommend to everyone that like to take horror seriously. There are no cool lines here, no flashy camerawork. Just a slow and gory horrormovie that takes your hand and leads you straight into a shivering nightmare. And gives me hope for the future. Essential viewing.
Upplagd av Jocke Andersson kl. 12:34 Inga kommentarer: