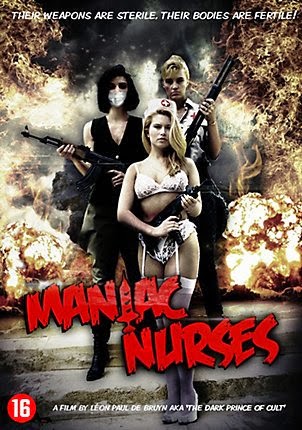 Seriously, I have no idea how to properly rate Maniac nurses. No clue, it's just so mindbogglingly bisarre and strange that just explaining the plot taxes my brain too much. But here goes.

A number of nurses hang around in an old hospital in their sexy underwear, lying about like footage from a lingerie commercial. While not fondling each other they kidnap young women and torture them or just go about blowing the heads of men. Or each other. The leader of the motley crew, Ilsa, has a young daughter that she either wants to make love to or already has a sexual relationship with (it really isn't made clear). The daughter, Sabrina, is a sociopath that reads violent comicbooks and just kills people randomly. While all this is going on there is a somewhat pretentious narration explaining why everyone is a sexual pervert and from time to time some text pops up on the screen scoring everything, dealing out points to all the maniac nurses.

And the best thing about it? I bought it from the director himself while at Weekend of horrors 2014 in Oberhausen. I am a proud owner of a personally signed dvd. I just wished that I had seen the movie before I left Germany, I have a lot of questions for him now.

Just a big WTF. And I would probably watch it again with beer and friends. 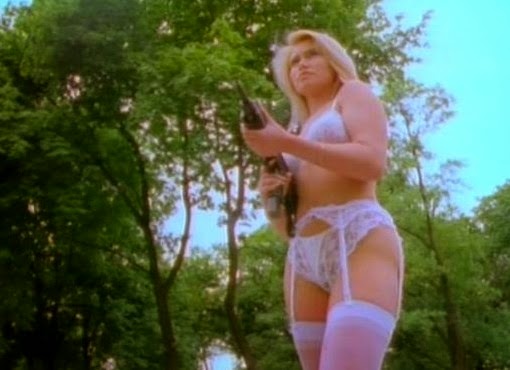 Aux yeux des vivants aka Among the living (2014) 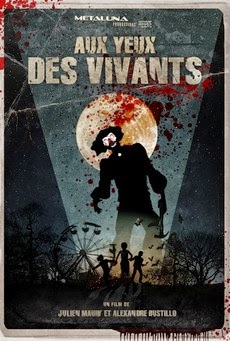 Why are Julien Maury and Alexandre Bustillo so obsessed with violence that truly hurts? Sick fucking bastards. This time they're telling a story about three young kids on the start of summer vacation that see a strange man carry a bound woman into an abandoned movieset in the woods. They follow and discover a quite dysfunctional family living in the ruins. Mayhem and death ensues.

Among the living might not go all the way Inside style (there is far less onscreen gore here and actually a couple of surprisingly gorefree deaths that made me wonder if I was watching a censored version) but there is some pretty harrowing brutal violence going on here as the movie progresses. The only flaw of the story is that it never really manages to blend the Stand by me-ish part of the care-free youths roaming the outskirts of their hometown with the more straightforwards horror bits. Both parts are fine enough with good child actors and a number of creepy bits but as the movie is only 85 minutes long including end titles we never really get to go deep enough into them as we really need and want to. The main villain is quite creepy and the death he dishes out is at times nicely harrowing but it isn't enough. A good flick for sure but nowhere near the insanity of Inside or Livid. It makes you wonder if the movie was cut down for pacing, it sure feels like that.

I do love the sight of a very pregnant Beatrice Dalle brandishing a large kitchen knife in the beginning of the movie, brought a nice grin to my face.
Upplagd av Jocke Andersson kl. 10:44 Inga kommentarer: 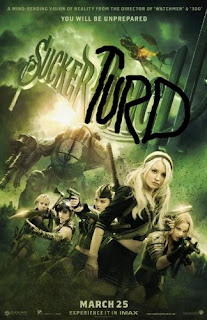 This is a cautionary tale.

This movie feels like it was written by a hormonally imbalanced 13 year old teenager who has overdosed on video games, which paints a not so pretty picture about the mindset of Zack Snyder especially since the whole fucking movie revolves around watching Emily Browning dress up like a thirteen year old schoolgirl. Everything is set to (mostly) awful popmusic that very rarely fit the tone of the movie other than the million scenes where the girls are walking in slow motion towards the camera, an overused theme if there ever was one that could have bordered on parody if I didn't know that the whole thing is totally moronically serious. It all boils down to the viewer enduring waves upon waves of Snyders patently retarded fight scenes where every punch ends in slomo and when the story is as bad as this you wonder what the hell is wrong with his brain.

At least it's better than Watchmen. The only reason I'm giving it one and a half star is that I kinda like the first two sequences, the samurais and steam zombies. And the fact that it flopped. But the rest is just a big bloated turd.
Upplagd av Jocke Andersson kl. 20:00 1 kommentar: 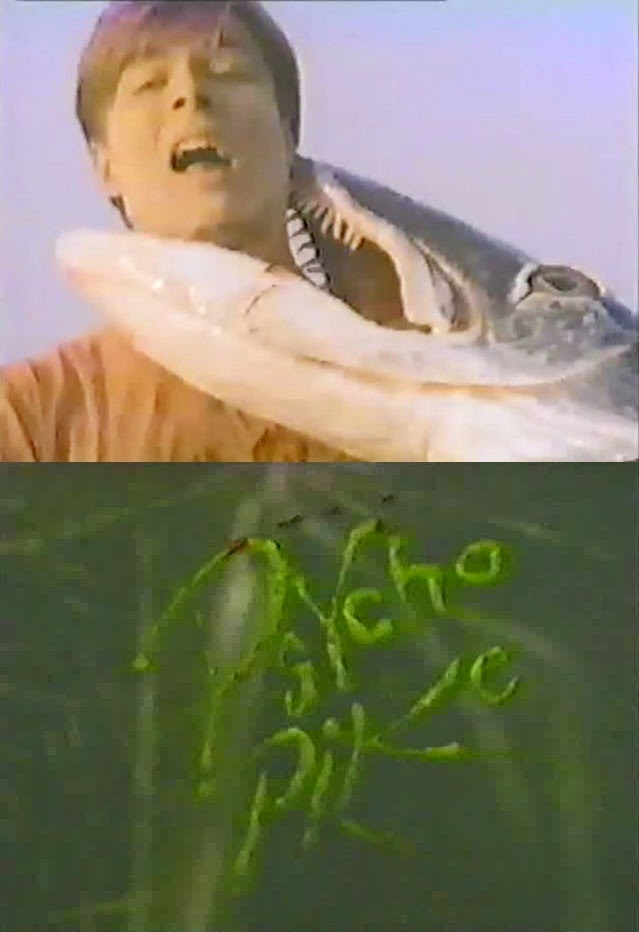 I hate fish. Sure, sharks are cool and majestic creatures and there are quite a few deep sea creatures that I enjoy scaring myself with by looking at pictures of them on the internet. But most of them are just smelly creatures that really don't deserve to live. Then there are the Pikes. Pikes are vile and disgusting creatures, massmurderers of our lakes. You will never see a Discovery special teaching you that they should be revered, I can assure you that. I've always wanted to see a killer pike movie and thought that I never would get the chance but to my amazement there had been one out there for twenty-two years! Ok, it doesn't seem like it got an official release but still! Twenty-two years! There was a large hole in soul until today! I finally feel complete!

The movie? Not particulary good. Low budget semi-serious stuff about pollution causing a pike to grow huge and some people that want to hide it. Two couples out on a fishing trip. You know. The usual schtick. Poor acting and very little actual pike. The final attack is awesome though and the pike itself is rubbergoodness beyond awesome. The movie not so much. It's obvious that they went for quirky (and who can blame them?) and some of it works. Sorta. I did have a nice time watching it but mostly for the novelty of it.

Soon back from the dead

If anyone cares the reason there has been no activity at all here is the fact that I have been home taking care of my daughter for the last two months. Swedens paid paternity leave. Or whatever it is called. Having a baby means very little movies, especially after they start walking.