I used to hate slashers. For me they represented a cheap form of entertainment, a streamlined sex and violence machine that became tamer and tamer as the genre progressed. It was mostly the Friday the 13th series that was the true culprit, each part feeling more and more like slick looking tv-movies but there were others like My bloody valentine that suffered multiple cuts due to censorship, turning an excellent movie into a bland soup.

But then something happened. I started to dig up old stuff that I missed back in the 80s and 90s, fun movies that never were released on dvd or blu ray. Low budget movies made with a heart, like The Final terror and Just before dawn. Then My bloody valentine was released with all the censored violence reinstated and suddenly I found myself back into the cesspool. And loving it. There are still clunkers, movies that could have used a bit more love and decapitations but you get past that, knowing that there are still gems out there.

Don't go in the woods just might have killed this for me, giving me a hard fist straight in my gut sending me spinning back into my old hatred. I don't know for sure yet, I need to think. To ponder. Is it worth it.

This is by far the worst slasher I have ever seen and it really shouldn't be. It has a perfect location in the lovely forests of Utah, a mysterious mountain man on a killing spree and one of the highest body counts I have ever seen in a slasher. But we also get some of the worst acting on camera ever. There is not a single person in this movie that can act. Not one. The cinematography is actually fairly good for such a low budget movie but that does not help one bit when the script is as bad as this and so poorly acted, making every minute seem like five. Sure, there is a lot of violence and some of it is fun in a cheap way but it is just thrown into the movie in random sequences and gets boring pretty fast. Violence being boring? What the hell is this?

This is truly boring beyond belief and should not be watched by anyone. Period. Damn you Don't go in the woods, damn you to hell.

It's at least better than Christopher Rays Shark week. I'll give it that.
Upplagd av Jocke Andersson kl. 00:25 2 kommentarer: 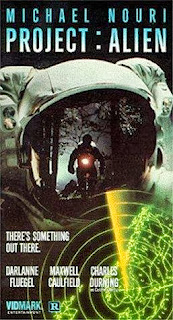 A military plane crashes in the forests of Norway while the skies are filled with what appears to be a giant meteorshower. The US military swoops in trying to hide the crashsite but a nosy journalist with the help of a spunky female pilot uncovers a hideous truth and a mysterious disease. And complete boredom enough to make you want to claw your eyes out.

The main issue that I have with this movie (being Scandinavian and all) is the fact that it is set in Norway but none of the actors portraying Norwegians even tries to sound like Norwegians. They sound like East europeans, which isn't that strange since the movie was shot in former Yugoslavia (Imdb claims that scenes were shot in Norway but I don't believe that for one second). This would probably not have bothered me so much if Project Alien has been a good or even decent movie but it is not. In fact, it is a complete and utter waste of your time.The script is just dull, full of irritating dialogue spoken by a group of actors sounding extremely uninterested. I have always thought of Michael Nouri as a decent actor but he is so bad here that he could turn milk sour just by being in the same room and Charles Durning is just embarrassing. The music sounds like it was taken from a late 80s pc game, just drones and drones of ugly general midi music and in the end we get a "nice" little package of total "Do not waste your time on this crap". Just don't.

Another thing that pisses me off is the fact that I want to accuse this of being an X-files copy, it really feels like one of their worst episodes. But since it was shot years before the first episode of that show it robs me of that tiny pleasure. Damn you, crappy movie! 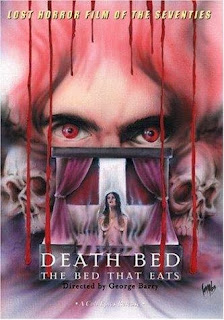 I'm not so sure that Death bed: the bed that eats is the best title for this movie so here are a couple of suggestions for what could work better:

Death bed: the bed that burps, farts and snores after eating people (and their food)

Death bed: How the hell was this movie made, it is about a bed that eats people for crying out loud!

Death bed: With pretensious narration by Stewie Griffin stuck in a painting

Death bed: A series of semi-random scenes with a really weak narrative

Death bed: A movie that makes no sense whatsoever but really should be seen to be believed 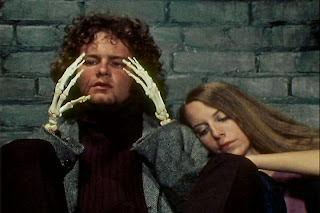 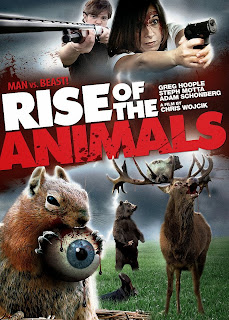 Rise of the animals sets the tone straight away with a scene of a distraught woman facing off with a badly dubbed cat, and proceeds to shove a stuffed animal into a garbage disposal unit. We are then treated to a wonderful scene where a clearly very happy Labrador kills her and we know we are in for a treat.

For some reason all the animals in the world have risen up to kill all the pesky humans. While this is happening a geeky pizza delivery boy makes a delivery to a small cabin in the woods where he meets up with Samantha, the girl of his dreams, has awkward and very quick sex with her only to wake up with her gone and the cabin under siege from a herd of very aggressive deer. Everyone but himself, his best friend and the best friends sister are promptly killed and Wolf, our hero, sets out on a quest to locate Samantha. Yes, a cute little road movie with the extra helping of the sister being in love with Wolf. Not exactly what I was expecting.

The whole thing is very tongue in cheek, which is has to be when all the animal attacks are either really goofy sock puppets or very crude CGI but it never takes the concept too far into Troma territory which makes it work just a little bit more than I expected it too. There is no mugging towards the camera, most of the kills are goofy but never too silly. The love-triangle kinda takes up a bit more time of the proceedings than I would have liked but it is never boring and the actors do a decent job in a scenario that requires them to be drenched in buckets of blood over and over again while having a straight face fighting CGI gorillas or deer sock puppets.

I suggest you watch the trailer first. If you aren't put off by it then chances are you will like the movie. I had a good time, the movies is too short for you to be bored (70 minutes. 62 without credits) and I like watching deer sock puppets biting peoples arms off. Dont you?

One final question though. What happened to Samantha? Watch the movie and answer that question for me. I have no idea.
Upplagd av Jocke Andersson kl. 14:14 Inga kommentarer: 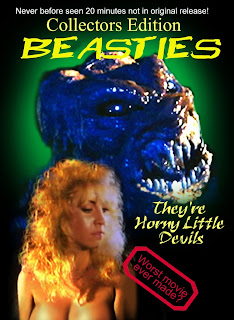 Once in a while there comes a great movie that tells a sweeping story about the battle between good and evil, going out of its way to show love through time and space transcending every obstacle and show us just how far a man is willing to go to alter destiny. This isn't that story. It does have fragments of such a tale deep within its murky cheapo shot on super 8 shell but this is for everyone that thought that The deadly spawn was too highbrow and glossy. This is BEASTIES!!

It starts of kinda fun as a couple of handpuppets kills a couple making out in the woods. It seems they came from some sort of spacecraft (we only see the leads describing it too us, the movie is that cheap) and our brilliant hero Nelson goes into it. All of this is swiftly forgotten as we are introduced to a bunch of punks that look like they came off the set off a Ratt video. They follow the bidding of the mighty Oseris who is supposed to be the harbinger of doom as the apocalypse grows near and Nelson is his prophecised opponent in the coming storm. How this ties up with the spacecraft is kinda... forced but we do get some boobs, several cool and cheesy handpuppets and a really really bad fightscene towards the end that has choreography straight out of a pornflick before all is revealed in a final plot twist that wants to be really clever and would have been if it came out of a fifties scifimovie but is just silly. Überlow budget mega cheese that does feel like the filmmakers are fully aware of their limitations, so I suppose you could do worse.

And if you are uncertain if this is something you want to watch, take a look at this. THE BIONAUT! Isn't he adorable? 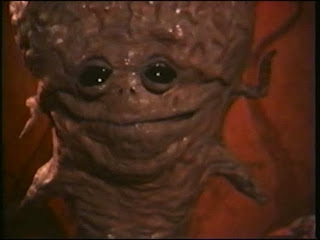