Five reasons why Firecracker probably is the best movie ever made. 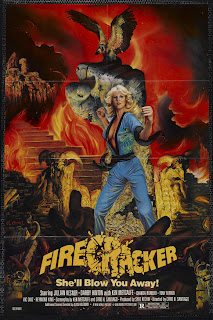 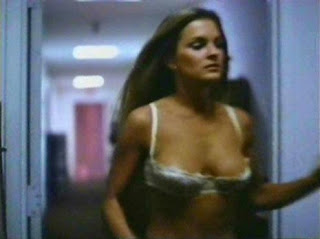 1. The Plot. Evil nasty drugpeddlers unfold the stupidest scheme ever to cut out a middleman while staging martial arts fights to the death in their private arena. Come on, this is brilliant! It does not fit together anywhere and is just awesome.

2. The "acting". Vic Diaz is his usual funny self, but the others? Jillian Kesner was not much of an actress and supposedly a female karate champ but the fightscenes are so goofy that you can never tell, especially since they are all slightly sped up. She does look really good without clothes and that topless fight on the construction site is one of the best pieces of entertainment ever produced anywhere. Period.

3. The music. As far as I can tell every piece of music is lifted straight out of Robert Houstons reworking of the first two Lone wolf and Cub movies, Shogun Assassin. And its credited to a Nonong Buencamino.

4. The violence. Not only does the before mentioned topless fight scene include a guy falling back on a scythe and a bad guy tumbling face first into an electric saw, the final demise of the evil, evil bad guy who killed our heroines sister is fucking great. Every movie should end with the bad guy getting *spoiler* his eyes gorily punctured in close up with wooden sticks! *end of spoiler*

A special mention goes to the lovescene with the heroine and the main bad guy, where they slowly and very erotically slice off each others clothes with a knife, all set to schmaltzy pianomusic in what has to be the most unexciting sexscene since Don Dohlers Nightbeast.

No, firecracker is not a good movie. Actually, it hasnt any qualities that would make it come even close to being a good movie. But all that cheezy acting, the nudity and the violence and the general throwing in the kitchen sink feeling of it all just makes it so damn fun to watch. What you should do now is to go out and buy Roger Corman's Cult Classics: Lethal Ladies Collection of which this is part of. No extras on Firecracker, but a good print and an all round excellent dvdset. Go get it. NOW.
Upplagd av Jocke Andersson kl. 09:35 Inga kommentarer: 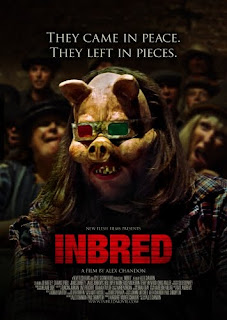 Watching Alex Chandons new movie Inbred starts out as a very familiar experience. Let's see if you've heard any of this before: Two social workers are taking a group of teens with different problems out on a trip north. North here means a rundown little town full of people with strange teeth and staying at an old house that hasnt been lived in for decades. We all know where this will lead, and it does. It doesnt take long before the locals and the cityfolk clash, resulting in injury and death. But this is where Inbred really takes off. Yes, we've seen it all before but rarely as fun as this. Instead of just pounding us with the latest ways of displaying that old "favorite", torture porn, Chandon takes his clichéd plot and infuses it with a lovely black and absurd sense of humour that reminds me a lot of the Belgian movie Calvaire with a dash of Monty Python, especially in the scenes where the locals put on a show which I will not spoil, it needs to be seen. Let me just say that there is a lot of twisted gore and demented imagery here that will put a smile on your face.

But what of the gore? Oh, there is plenty of that, all practical (well, 99.9% of it actually according to Chandon himself). Exploding heads, limbs sawn off with chainsaw, heads split open with an axe, you name it. This is a wet dream for a gorehound and the effects are really good, some of the best I have seen in a low budget movie ever.

If there is anything to complain about it is that the characters are somewhat weak, all of them products of the familiarity of the story but this is never really an issue since all of them are played by a really good group of actors, both the leads and the smaller roles. Everyone brings their own strengths to their roles, so even if the characters arent very interesting, they are still acted well enough for you to care about their eventual demise. The locals are especially fun to watch as they do their vile and bloody deeds when they are played by actors that obviously are enjoying themselves a lot.

Inbred falls firmly in the category of "Stupid and ignorant citydwellers fall foul of countryfolk" but instantly rises to the top levels of it because of the way it plays out. There is playing cat and mouse, there are traps and there are hicks laughing at dying Londoners, but thanks to the talent and energy both behind and in front of the camera we never really get the chance to realize that we've seen all of this in ten other movies, we just enjoy the ride. And you should too. Look for it in the future.

I saw this at the Weekend of horrors convention in Germany earlier today, together with Fred "Ninja dixon" Anderson and Jason "Cinezilla" Meredith and we were all blown away by the sheer fun of it, all of us starting to write a review in our heads. There was a short Q&A afterwards with Chandon and one of the producers afterwards where he told us that the version we saw was completed very recently and that they are looking for distribution. Let us all hope that this comes out soon, I want to own this now! In the meantime we will all bitch about who thought of Calvaire first. FYI, Jason stole it from me.
Upplagd av Jocke Andersson kl. 00:02 1 kommentar: