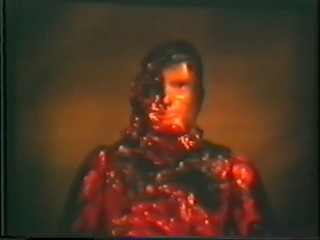 Sometime in the future after some sort of catastrophy the surviving humanity live in the cities, never venturing outside since the wilderness is infested with the living dead. Max Maker, the hero of this story, travels out into the wild to search for survivors but encounters only death.

What we have here is 25 minutes of gore and a great atmosphere with the added bonus of a hero that looks a lot like Han Solo. That is because he is Han solo. Well, actually a Han Solo action figure. All the characters are action figures except for a barbiedoll or two. What we really have here is a crude stop motion postapocalypse zombiemovie shot with a Super 8 camera using dolls and actionfigures (A Tattooine landspeeder even makes an appearance). There is no sound except for the soundtrack that lifts music from movies such as John Carpenters Halloween and the only dialogue is told through corny intertitles in German. And i loved it.

The biggest reason that I liked this is the fact that this is truly something that I wish that I had made when I was 15 (just guessing. I have no idea how old the filmmakers were at the time). It is crude and repetitive but the simple yet effective sets combined with action figures turned into zombies by melting off pieces of their heads is just so lovable. I must have a subconsious fear of the cold, blank stare that these plastic pieces of old have since I find them nicely creepy. There is no real plot to speak of. Han Solo, I mean Max Maker, kills zombies during the day and sleeps in a cabin at night all while some sort of supernuklearzombie watches over him, waiting to finish him off. Torn up action figures are covered in blood, melted and blown up until the end that promises a sequel. And thats it. Freaking awesome, the fun factor is as high as the stop motion is crude.
Upplagd av Jocke Andersson kl. 14:51 Inga kommentarer: