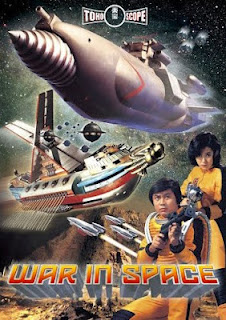 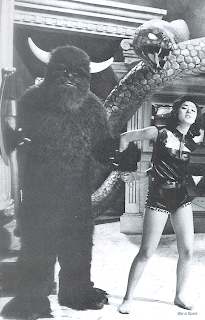 This movie brings back memories, so far back that they aren’t exactly crystal clear. Sometime during the early 80s, 1982 or 1983, my parents took me on a trip to the southern parts of Sweden to visit relatives and as soon as we arrived I got a high fever and was basically bedridden for a week. My relatives had a vhsplayer (this was before we had one of our own) and I managed to persuade them to rent a movie I had checked out earlier called Planeternas Krig (Planet wars - a not so subtle Star Wars reference). I spent the following day watching the movie over and over and over again and this is about the only thing I remember about this particular holiday. Now some 30 years later I finally managed to get hold of the dvd of this very movie and while my memories of it were distant and clouded, I still got a sense of joy just by owning it. During the years that have passed I have also found out that the movie was directed by the infamous Jun Fukuda, fuckerupper of many a Godzillamovie which made me wonder if I would still like the movie. The question is, is the movie as good as my boiling 10 year old brain remembers it?

Things are rough in the future that is 1988. When a space station is destroyed the Japanese government realizes that something is up and revives the Gohten project (Yes, the T should have been before the H), a giant spaceship built to protect Earth from nasty aliens. It doesn’t take long before the skies are filled with of thousands of small Ufos, blowing up cities by the hundreds with their lasers. Que lovely Toho mass destruction. The mean aliens are traced to the planet of Venus and the Goth, I mean Goht, is sent to clean up the place for good. The aliens won’t make this easy of course, kidnapping the Captains daughter and coming up with lots of other ways that they think will stop our heroes. Lasers galore!

The Fukuda stigma lies heavily over the movie and the first 20 minutes are mostly filled with dialogue and internal strife, but as soon as the mayhem starts everything gets plain awesome and manages to keep a fun momentum all the way to the end. There's a shitload of excellent effects and destruction, making me giggle like a child in a toy store. It is pretty obvious that the movie is heavily influenced by Star Wars (the even got their own wookie - but with horns) but it all has a Japanese tint that keeps it away from straight plagiarizing. What we have here is 90 mins of pure laser filled fun and that is enough for me, making me recommend this one to all lovers of Japanese mass destruction. To use the old cotton candy comparison again, it might not be good for you but it tastes so yummy!

Wakusei Daisenso aka War in space will from now on be remembered as the movie that made me stop disliking Jun Fukuda and that's quite a feat. If you like Kaijumovies you will love this.
Upplagd av Jocke Andersson kl. 12:30 Inga kommentarer: 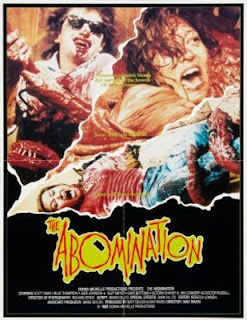 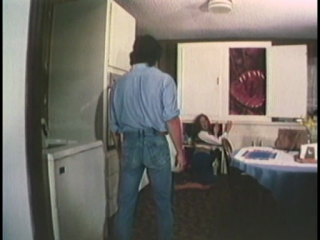 Cody lives in a rundown house down white trash lane with his religious mother that spends her days watching television evangelist Brother Fogg, beliving that only he can cure her of her lungcancer. After a healing session on the tv she coughs up a tumor which then mysteriously disappears, only to crawl into Codys mouth during the night. This strange tumor now takes over Cody completely, spawning additional weird creatures that start to nest in the kitchen all while making him kill random (and not so random) people in various cheap and graphic ways.

Wow. The Abomination is truly a wonder to watch. I have no idea what the budget was but it cant have been more than pennies, which makes the whole thing so much more impressive. Yes, it is cheap and horrendously acted (not made better by the fact that the movie was obviously shot on super 8 and dubbed afterwards by a group of people with the enthusiasm of sloths) but the movie rests on the awesome foundation that is THE ABOMINATION!. This creature is a huge mass of teeth and tentacles, filling the cupboards and drawers with its gloopy, rubbery nastiness. When Cody isnt outside slitting peoples throats or whacking off heads with shovels to feed the creature he brings them home and even gore ensues. If you can stick with the excruciatingly droning dialogue there is much joy to be had from all the stupid silliness of The Abomination. It's like David Cronenberg designed a goreversion of the muppet show, only to have Andy Milligan rewrite and direct it, just mindboggling and so plain odd and entertaining. Recommended for fans of 80s cheapo gore and those of us that like a little cozy weirdness on their screens.¨

You can buy it here on a doubledvd with Ozone: Attack of the redneck mutants.
Upplagd av Jocke Andersson kl. 20:09 Inga kommentarer: