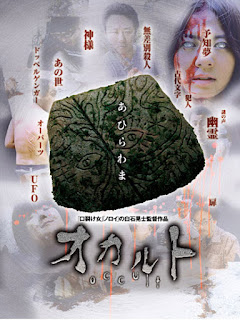 Kôji Shiraishis 2005 Noroi is one of the finest mockumentaries I have seen to date, a tautly constructed chiller that builds its case slowly and deliberately, making itself a perfect example of how a fake documentary should be done. Four years later Shiraishi comes with another movie in the same mold and proves that he is a strong filmmaker who is in his true element. Unfortunately he also shows that one bad scene can almost ruin a movie but more on that later on.

Okarauto aka Occult is one of those movies you should go into knowing as little as possible about plot and I will only tell you the basics. Shiraishi plays a version of himself, a documentary filmmaker looking into a strange killing spree in a forest park where a young man started to kill indiscriminately before jumping off a cliff and vanishing. He interviews the survivors and relatives of the victims and is told a number of strange things that at first just sound weird such as the husband of a dead woman who claims to have seen his wife and shows a photo of himself with a woman in the background that looks a lot like her. Another man that was stabbed in the back several times has a strangely shaped scar very similar to a birthmark that the perpetrator had and it goes even weirder when he claims to have started to see strange ufo-like things that he calls miracles. The documentary makers decided to give him a camera to documents all these happenings and from there the story really starts to take into strange land.

The best thing about this type of movie is that it is based on legends that are very Japanese, taking its horrors from a source that is somewhat similar yet very alien to our own, thus being perfect for a horror movie. Somehow I think that this works even better for a gaijin like me that hasn’t grown up with all of this. This is the reason why Noroi is so good and while Okurato might not use these as much as I would have liked it to, it still has that very undercurrent of odd folktales that keeps the story interesting, especially in the latter half of the movie when Kiyoshi Kurosawa cameos playing himself as an amateur researcher into a particular legend. This leads to a series of quite unpredictable events and a very shocking ending that really punches you in the gut. But, and there is that major but, now we get to the major flaw of the movie. The special effects budget of Okaruto must have been exceptionally low. Most of the "miracles" that one of the characters see all the time are shown with really simple and cheap digital effects which I suppose could take away some of the atmosphere of the story. They aren’t exactly awful and some even work really well but it is most noticeable in the final coda of the movie, a short sequence that is so mind-bogglingly bad that you wonder if the director’s ten year old son made it and put it in the movie with anyone knowing it. I would not be surprised if some people would rate the movie negatively because of this since it is actually that bad. This is a true shame when the rest of the movie is a good as it actually is and personally I try to dismiss the ineptness of that scene and take it for what it is supposed to represent (though I admit it took me several days to overcome this little hurdle). While some of the parts of the story might not gel into the picture in a satisfying way (I suspect they were just there to add some additional mystery) the whole experience is what matters and this movie does that very well. There are several exceptional plot twist that needs to be seen with your own eyes. Okaruto is simply put a well written, well-acted and very exciting fake documentary about a number of supernatural events that merge into a horrible coming event and if you liked Noroi or fake documentaries in general, then this will serve your addiction well. It's a shame about that final image but personally I wont let myself hate it. The rest of the movie is that good.
Upplagd av Jocke Andersson kl. 10:56 Inga kommentarer: 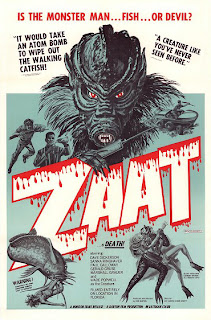 I have seen things, things beyond comprehension. Things on the borderline of insanity, meandering streaks of complete and utter boredom that would make a normal person rip their eyes out but instead I choose to embrace them, to welcome them into my mind and while someone else would perish, I mostly let out a chuckle or two. But now everything has changed. I have encountered a true monstrosity that will leave me mentally scarred for life. If it lets me live. 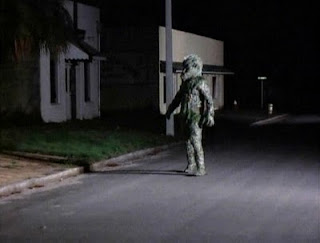 This is not just a movie; it is a document of something beyond everything I have ever seen. It is a gathering of extremely repetitive images and sounds for ages upon ages and normal circumstances would maybe create something hypnotic, something that dulls your mind with its own stupidity. Not Zaat. Zaat tries to destroy you, tear down all the mental boundaries you have created since your birth and thrust itself straight into your mind and scream with a carnal power that only sees you like an obstacle to tear down into tiny fragments!

So what is Zaat? First of all, this is a tool. A tool to bring forward the darkest emotions from the deepest pits of despair. We watch a nazi-tinged dream of biological superiority, to create an army of foul man/fish hybrids as a scientist finally succeeds in his quest to become that very thing of horror. Revenge is first as he tears out the throats of the members of the local scientific community that spurned his research but then he moves on to procreation, to breed with a female human and spawn more monstrous hybrids. A special team of two experts are brought in to unravel this ungodly menace but Zaat is nothing you dispose of easily. Zaat!
This is 100 minutes of pure torture, designed to shred your brain into tiny pieces ready to be shaped into exactly what the makers of Zaat want it too. We get to watch Zaat walk and walk and walk and walk, sometimes swim. We see Zaat kidnap a young girl and fail in trying to convert her into his foul bride. We see nothing that comes even close to being anything other than an excruciating droning journey, clean from the violence and nudity that usually comes with the genre. No, this is the equivalent of watching straight into the eyes of a mad god! This is the essence of boredom, ancient mother of all the legends of dull cinema you have ever heard of.

The media that Zaat is presented on is nothing more than exceptional if you accept the fact that this is a device to turn your brain into mush so that the cult that is Film chest can drive you into the asylum like a pack of lemmings over a cliff. The image is strong and clear with maybe a tad of faded colors which is good - Zaat with crystal clarity would most likely blow a hole straight through your head.

I really don't know what more to say, I fear this movie. I fear what it represents and at the same time I applaud the makers for actually making it and Film chest for releasing it. Think about it, it cannot be a coincidence that this is released in 2012 - the very same year that the Mayans predicted the world to end. And we all know that a world where Zaat exists needs to be destroyed.
Upplagd av Jocke Andersson kl. 12:58 Inga kommentarer: