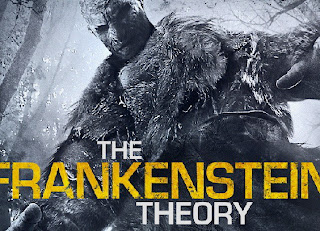 Andrew Weiners Found footage/mockumentary might be dismissed by a lot of people as another movie coming late in a dying genre. Let's face it, there are quite a few really bad movies where the filmmakers have watched Blair witch project and constructed a lame story about morons running around in the woods. The Frankenstein theory on the other hand, while not breaking any new ground, actually has a lot of thing that speak in its favour.

First of all, the story is quite interesting, claiming that Mary Shelleys Frankenstein was a work of non-fiction, based on an event that actually took place. We follow Professor John Venkenheim who is the subject of a documentary while his academical and personal lives are falling apart. You see, he has quite an odd theory that he wants to prove, that Frankensteins monster was an actual creature - a triumph/catastrophic failure of very early genetics and that it is still out there roaming the wastes of the Arctic circle, killing to stay hidden from humanity. Haunted by the fact that it was his own family that spawned the creature he decides to find it, no matter the cost and takes the cameracrew in the the arctic wilds of Canada. Of course, things go wrong.

Another of the movie's strength is the fact that it does look like a real documentary, the camerawork is professional, the wobbling camera is kept to a minimum and all the characters (a lot less annoying than the usual assholes that run around in the woods chasing spooks) are played by decent actors. The snowy landscape is an excellent setting (I want more snowhorrors goddamnit!).

The Frankenstein theory is a decent enough Found footage film that isn't you run of the mill crapfest, if you like the genre you might possibly be enjoyed by this. It does have one quite substantial flaw (and this will get slightly SPOILERish) and that is the fact that is doesnt really go anywhere with its interesting story. They travel to the wilderness and encounter some strange going ons and while it is still entertaining and somewhat creepy, it ends up fairly cliched. Just another Boogeyman. It doesn't kill the movie, just makes you yearn for what could have been. (END SPOILERishness).

In the end The Frankenstein theory is an above average Found footage movie (Believe me, I have seen much worse) and I'd advise you to check it out. It won't rock your world but you will be reasonably entertained.
Upplagd av Jocke Andersson kl. 13:32 Inga kommentarer: 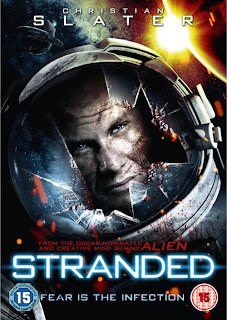 I actually preordered this movie just from reading the plot, I am that much of a sucker for scifi/horrors. I mean, come on. Meteorite crashes on moonbase, bringing spores that infect a woman that goes instantly pregnant and within 24 hours gives birth to a humanoid thingie with a predator-ish mandible mouth. I did not go on Imdb to read reviews or look it up online, I had to have it. It was as simple as that. Roger Christian, the director, will always live in infamy because of him being responsible for Battlefield Earth but we have to remember that he also directed The Sender, a very underrated little chiller back in the early days of his career.

Stranded is quite a timeless movie, it doesn't have any clothes or technology that specifically places it in a particular time and it uses miniatures instead of CGI. It could easily have been set in the 80s or the 2000s. In fact, the only thing that actually tells us that we are watching a movie made in 2013 is the fact that Christian Slater is getting "older-ish" (That man has aged well, that's for sure). It feels like it could have been a Roger Corman production, released by either New World or Concorde. The story is straight out of a fifties scifi movie and gets in gear without any real character setup, the meteorites start smashing the half-decent models right after the credits and moves on at a good pace introducing the ways of the creature right up until the cliched ending. It doesn't try to break any new ground whatsoever and works fine just because of that. Sure, the actors are bland (mostly because of the weak characters) and the movie could have gone for a bit more of the ole' gross-factor but the important thing is that you never have the chance to be bored. It won't be remembered as a cult classic in the years to come but I sure as hell don't regret buying it. It's no Forbidden world but you could do much worse.
Upplagd av Jocke Andersson kl. 15:31 Inga kommentarer: