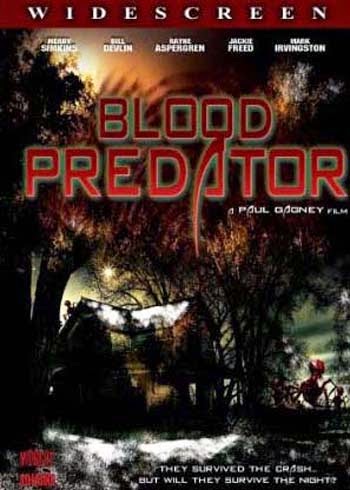 A group of people on their way to a ski-resort are involved in a planecrash and end up stranded in a cabin, besieged by alien creatures hungry for human flesh. And that is about as positive as I can be about this snoozefest of a movie.

First of all Mr Filmmaker, if you are making a creaturefeature, please have some creatures in it. Oh, we do get creatures but it takes exactly one hour and seven minutes of wading through a lot of pointless bickering of some of the most cliched and annoying characters ever put on celluloid. It's not even like you are hoping them to die horrible deaths, you are actually finding yourself devising scenarios where someone travels back in time and murder their ancestors so that they never existed in the first place. And when we do get creatures we are treated to "special" effects that make Bert I Gordons Empire of the ants look like an showcase for new technology. A mixture of wobbly puppets (that look sorts ok when they don't move) superimposed on the screen and really crappy cgi that looks like they didn't even bother to finish it properly.

No, this is not worthy of anyone's attention. The actors aren't totally worthless but the dialogue they are forced to spout is just fucking awful. There is a bit of gratitous nudity (including an odd scene where a lesbian character seduces a woman whose husband just got killed) and some minor gore but its far from enough. Skip it.
Upplagd av Jocke Andersson kl. 12:00 Inga kommentarer: 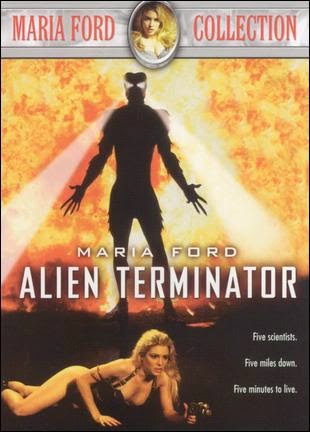 This low budget Alien ripoff is just so mindbogglingly awful that words cannot describe it accurately. Here are a few nuggets of joy:

They copy the chestbursting scene from Alien, complete with during dinner and convulsions, only with the minor difference that the alien comes out of the guys back. This way they won't have to spend any money on the effect, just show a big bloody hole afterwards.

Towards the end, when the whole desert underground base blows up, the movie cuts to a scene of an explosion in a city apartment where a man in a monstersuit goes flying out the window. Wtf?

There is a really charming scene of a couple having some wine in an air duct, only for the girl to take her top off so that the guy can go straight to sucking on her silicone boobs. Eh.

This is a shitfest. I like Alien ripoffs and have seen quite a few clunkers in my days but I'd rather watch Savage water again than this. It is THAT bad.
Upplagd av Jocke Andersson kl. 11:10 Inga kommentarer: 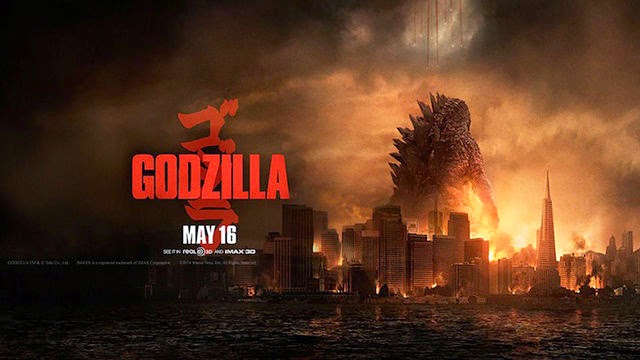 So, here it is. The new Godzilla. I've been a fan for at least thirty years now and after watching the trailers you could easily say that my expectations were beyond sky high. I am happy to say that I was not disappointed one bit. I won't discuss the plot here, you know parts of it already, just mention the good and some of the perhaps not so good parts.

Well, most of it. Gareth Edwards Godzilla is a visual feast with superb special effects and tons of cool mass destruction. The plot is nothing new but Toho has been rewriting the origin-story several times and as such it's pretty good. Most importantly, this is a smorgasbord for monsterlovers. The Mutos are fricking awesome although they do look like they should belong in a Gameramovie (Gyaos anyone?). From looking at the leaked actionfigurepics they looked kind of silly but I can assure you, they are worthy Kaiju. As for the new look of Godzilla: Yes, he looks different. More thicker, denser, bearlike almost. But this is about the eight new look he has gotten so who cares. Get over it.

The not so good parts:

The characters are flatter than the people Muto steps on. Heck, even Pacific rim had more depth in that area which says a LOT. On the other hand, most of them are fairly likable, unlike Pacific Rim which had a bunch of angsty teens that you wanted dead.

And this is about as SPOILERY as I am going to get: It could have used more Godzilla.

The 3D is pretty useless, you need not bother with it. 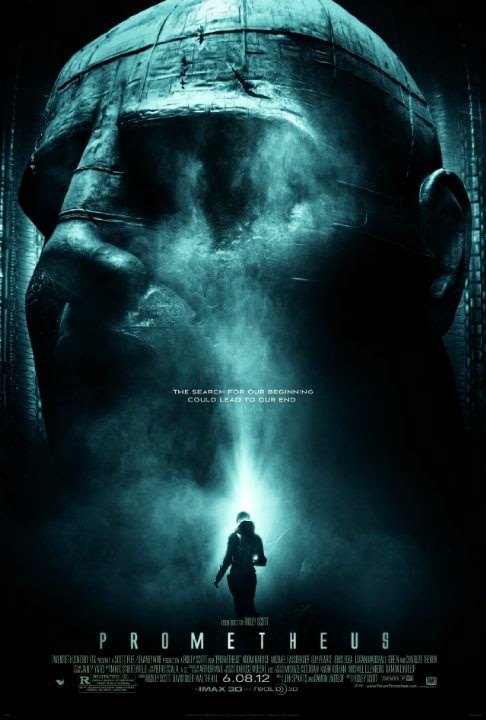 I was halfway through rewatching Prometheus when I got the news of H.R Gigers death. Although Giger did not work on this movie the whole look of it is taken straight out of his masterful designs on Alien which means that this review will be my tribute to the most exceptional artist the world has ever known. RIP.

Ok, there are a couple of major issues with Prometheus, coming from one single source: the script.

Firstly we have the Alien connection. By rewriting the alien history a lot of fans were pretty damn pissed off, and fair enough, I understand them. A little. We wanted xenomorphs, not squids. But as far as the plot goes it isn't that bad, only different from what we wanted. A little blunt maybe but still worthwhile. And the squid is actually quite a cool creature. I mean, anything with tentacles is cool. Even Monster shark.

Then there are the characters. Looking back at Alien with its colorful crew we have to settle with a bunch of bickering, faceless buffons. Yes, they bickered in Alien but that felt like it was actual people arguing, not actors speaking from a script.

And now we come to my only genuine hatred towards Prometheus. The space jockey. One of the absolutely coolest things about Alien is that so very different remnant of a creature, one of the very very few instances in cinema history where we were able to lay our eyes upon a truly alien being, something so mindbogglingly different from all the bugeyed aliens before and after. I was well and truly pissed off over the fact that this was just an exoskeleton, a fucking spacesuit. Years of picturing from what alien hell this was spawned from was just blown out of my mind with a single scene. I hate the filmmakers for that, I really do.

So why am I still rating this movie as high as I do? Because no matter what flaws the script have, it still is one hell of a gorgeous looking scifimovie that has all that sure craftsmanship that we are used to from Ridley Scott. And as soon as I remember that this isn't really a prequel to Alien, then I'm actually pretty damn content. Just the scene of the Prometheus entering the atmosphere and landing on the surface of the planet makes the blu-ray worth its price..

Oh, I forgot about the donutscene. Why the hell would you try to flee a tumbling spaceship by running in it's PATH? Gah.

And they really should have used the alternative scene of the mutated geologist attacking the Prometheus. It looks so much more alien instead of a guy covered in latex. 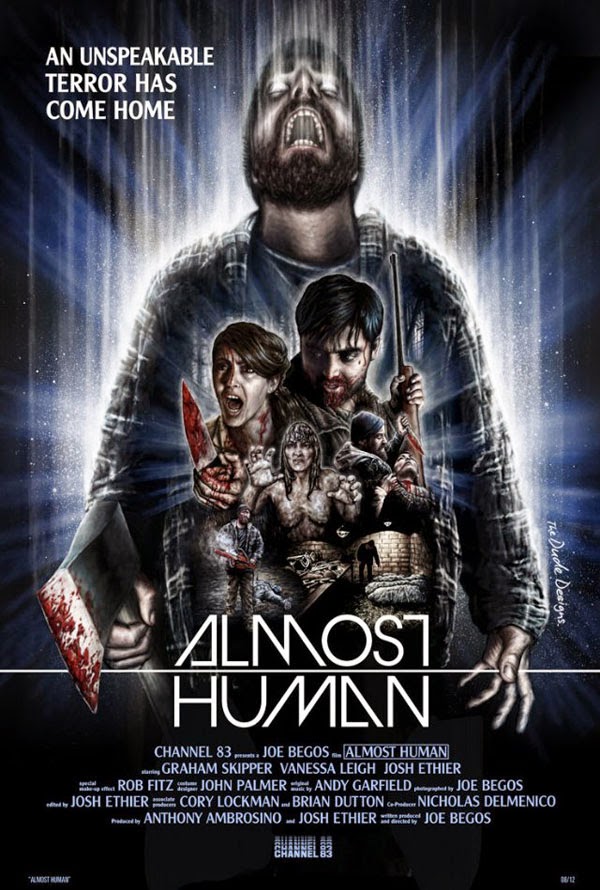 Guy watches friend get abducted by aliens and no one believes him. A couple of years later friend returns and starts a rampage of  bloody Xtro reenactments.

I wanted to like this Xtro homage more than I did, it has a number of good points like a simple but fun plot and a lot of really bloody old school violence. Josh Ethier is an excellent lumbering hulk of a monster and while some of the minor characters are pretty mediocre, the leads do an ok job. Unfortunately Almost human is a bit too short to really go anywhere special, it runs through the usual numbers in its brief 80 min running time (of which 8 are really, really slow end credits). It might sound like I didn't like the movie, I did, but it had the potential of being something more, something squishier and gloopier but instead chose the easy way out. If you compare it to the obvious influence, Xtro, it is so much more restrained and by the numbers. I suppose it might have been a budgetary issue so we'll have to do with what we have now which is a fairly fun and gory monstermovie, which isn't actually that bad. I look forward to what writer/director Joe Begos comes up with in the future because there is nothing about his direction and scriptwriting to complain about, on the contrary. It's just that somewhere on the way his vision got a bit limited. Until next time. I'll be there waiting.
Upplagd av Jocke Andersson kl. 12:11 Inga kommentarer: