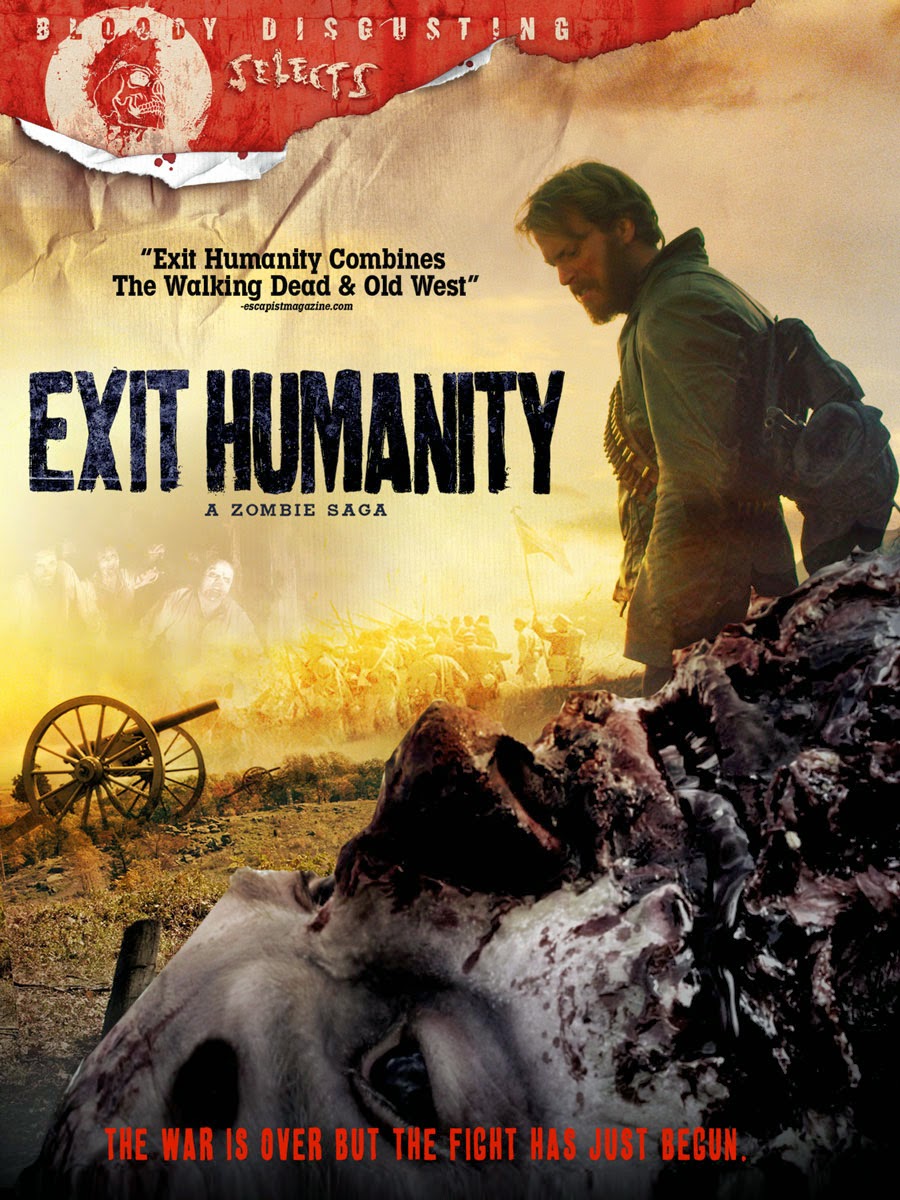 I've said it before, a subgenre that needs to expand is the horrorwestern. There is so much potential in stories that take place in the unexplored wilds of the old west and there should be more movies like The Burrowers, Eyes of fire and Deadbirds. That is why I had at least some expectations on Exit humanity and unfortunately I was quite disappointed.

The movie had some potential in the shape of a great premise, a man travelling through the zombieinfested wilds of America after the civil war. It also looks good, well shot on what was obviously really limited resources. Any major setpieces are shown with simple yet good looking animated sequences. The actors are doing a decent job as well though some are better than others with the drawling accents.

The major flaw comes from another direction and is way more fatal to the movie than anything else - storytelling. John Geddes, writer and director, does not tell a good story, it's as simple as that. Exit humanity is divided into a number of chapters that might be connected to the major plotline but never gel into a satisfying experience. Everything feels fragmented and it does not help that it is at least half an hour too long, at 113 minutes it becomes a chore to watch at times. It is also told with an very overbearing, bombastic style that is even worse when everything is hammered home with an overdetailed and pompous narration by Brian Cox.

No, this was a disappointment. It's not outright bad, just flawed to a point where I would not recommend it.
Upplagd av Jocke Andersson kl. 13:11 1 kommentar: 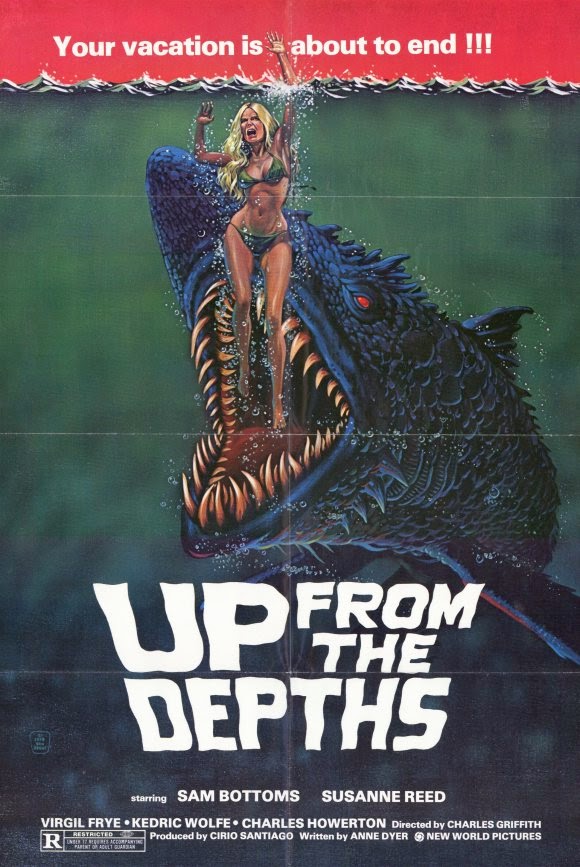 I recently became the father of a girl after four years of trying and failing. In the end science came to our rescue and Adèle arrived in August last year through the magic that is called In vitro fertilization. It might come as no surprise that this little lady is infinitely cherished, we went through quite a few hard times before finally arriving at the point where we are now and I'm fully aware that this girl will be spoiled rotten to the core and beyond. I accept that and I will face all the consequences of my actions.

So what the hell does this have to do with Roger Corman and Cirio H Santiagos cheap and incredibly dull Jaws clone Up from the depths?

I had my at the time of writing seven month old daughter squirming away in my lap while watching this movie, spending most of the time trying to keep her occupied. I told her "I love you as much as this movie is boring". I love my daughter a lot.

And if she misbehaves in the future I'll force her to watch this over and over again. I think more parents would be helped by this. Though if I'm lucky/unlucky she will actually like it, which means I have raised her right. Or wrong. What the hell am I doing? I have no idea.
Upplagd av Jocke Andersson kl. 13:31 Inga kommentarer: 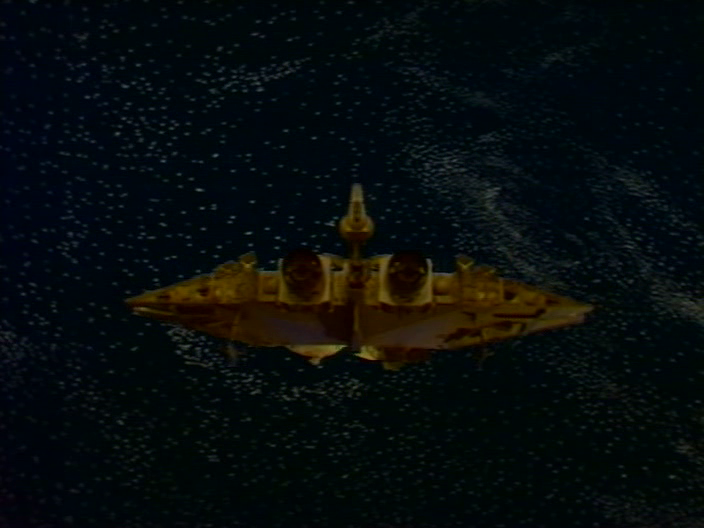 A spaceship trying to land on an unknown planet is shot down during descent and the survivors hunted down and killed by an unknown assailant, but not before the last crew member manages to warn the authorities. A rescue team is sent out, led by the suave Tony, and they find a couple of surviving scientists and a young woman with no identity. Who is killing everyone and why? 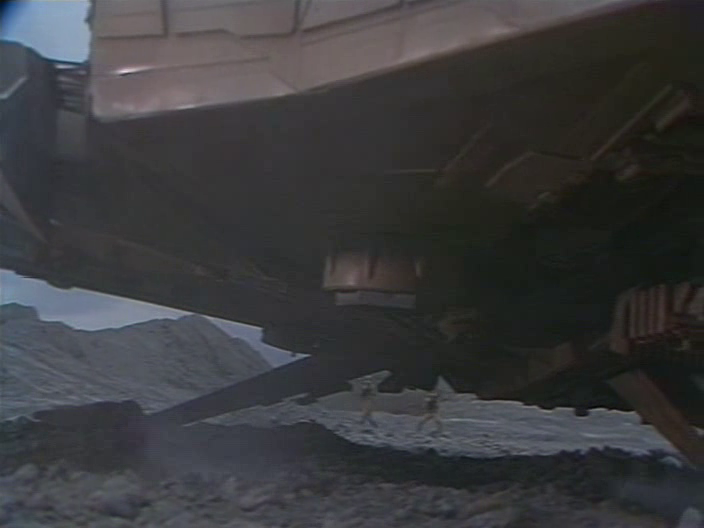 This charming Hungarian tv-movie is just too adorable. It is pure East European scifi that feels like it is a part of an existing, ongoing story with a cool back-story about a fairly totalitarian society controlled by a computer. The sets are clunky but well designed and the models are fairly detailed, you can tell a lot of time was spent building them. The problem is (for some people. Not for me) that the whole thing looks like a Tom Baker era Dr Who episode, shot on video and having tons of very 80s chroma key compositions. If you look past that you get a very cool and lovingly stiff tv-scifi that is a hoot to watch with its fun electronic soundtrack and computers with vocoder voices. It does fall apart towards the end when we are treated to a big action-piece with a firefight in a cave that makes no sense whatsoever with everyone looking the same in their spacesuits and you have no idea who is firing on who. But by then I was already in love with all the hokey happenings. Good cheap fun. 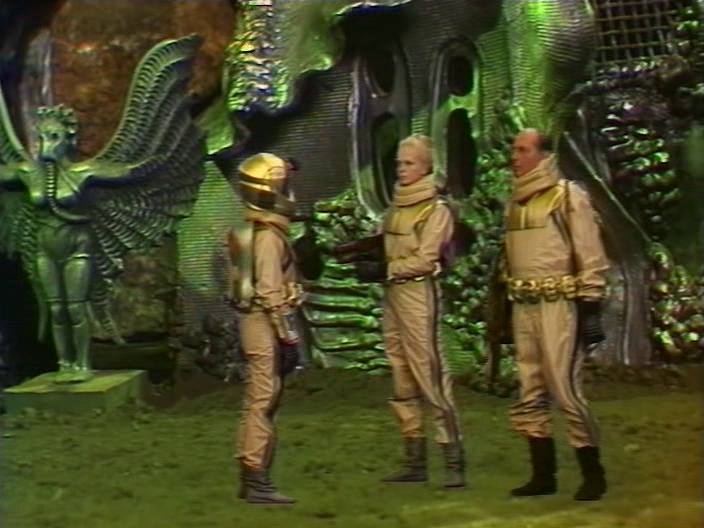 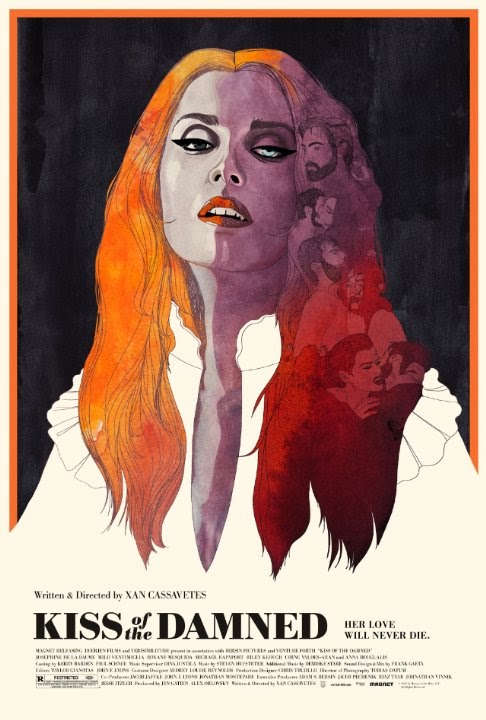 Xan Cassavetes erotic arthouse vampirehorror is an interesting movie. It's pretty obvious that the major inspiration comes from eurohorror like the late great Jean Rollin and as a tribute or a pastiche it is quite succesful with an air of eroticism pervading the whole enterprise, achieving perfection with gorgeous cinematography and a most excellent soundtrack. Where it fails though is the story which is light as a feather and mostly not really that interesting. We met Djuna the vampire who falls in love with screenwriter Paolo and turns him into one of her own, embarking on a passionate love affair. Mimi, her hated sister arrives and tension rises but not much of interest for the viewer, up to this point the actors have spent 45 minutes action like every character in an arthouse movie is expected to act. That is until halfway into the movie when we find ourselves at a party where we meet the enigmatic Xenia, something of a vampire patriarch that views humanity as something fragile that should not be harmed. The discussion she and her fellow vampires have about human kind brings so many interesting ideas and has more spark than every god damn vampire movie made in the last ten years put together. After that the whole enterprise becomes much more interesting and when Mimi sets things in motion for her own personal gain toward the end I found myself enjoying this much more than I was expecting after the pretty but slightly empty first half. The ending could possibly have gone a different way than it actually did, there was an opportunity for some grand mayhem but really, it would not have been proper for this movie. 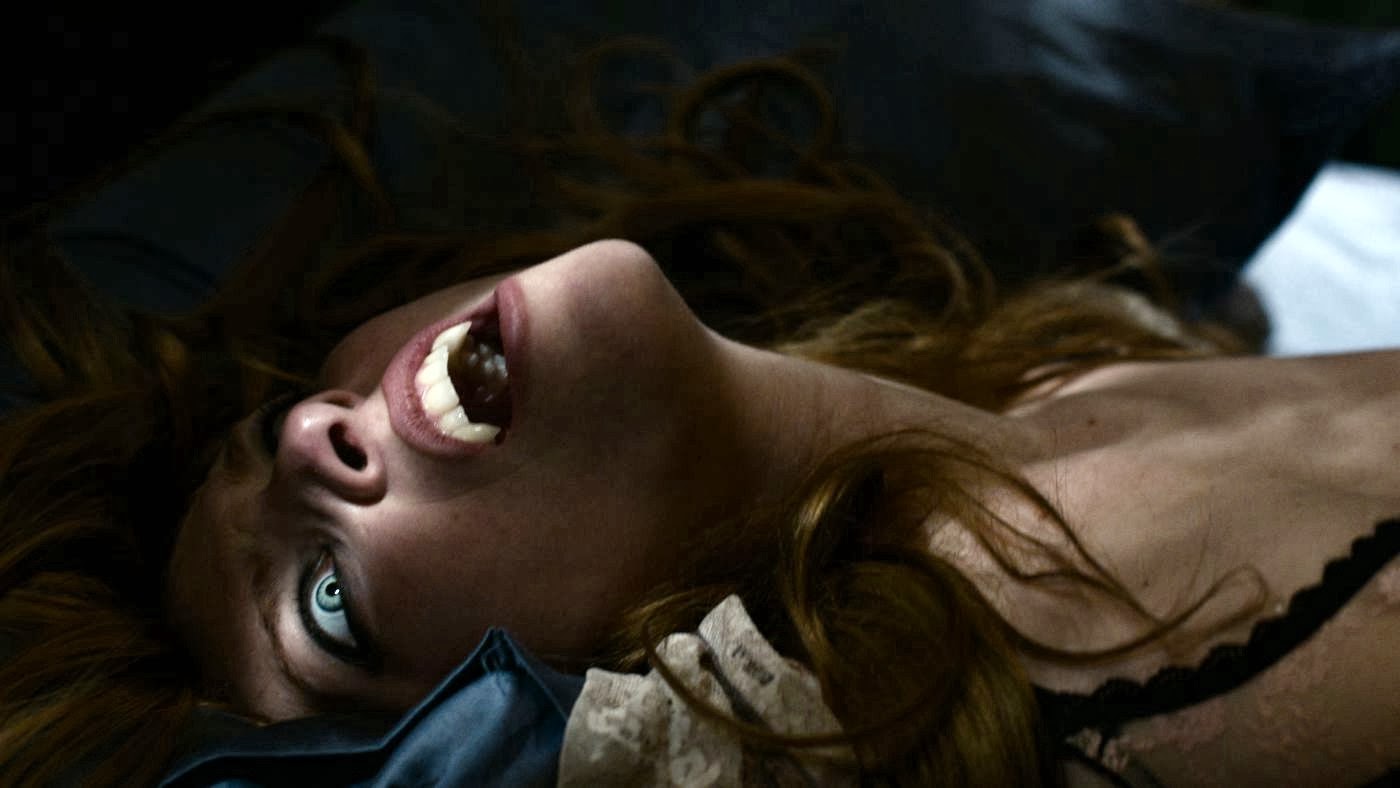 So, Kiss of the damned is a sexy and beautiful love story drenched in blood. Slightly flawed but in the end a very rewarding experience.

And don't just hate it when you recognize an actor from somewhere and you realize it's from Gilmore girls?
Upplagd av Jocke Andersson kl. 09:31 Inga kommentarer: