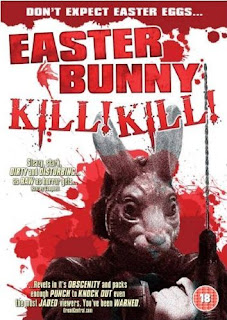 The main reason I bought this movie was because a friend of mine has an somewhat unhealthy obsession with bunnies, flooding all of his digital life with imagery to the point that people are starting to abhor him. We have a semi-regular gathering that consists of him cooking and me bringing strange movies to watch while we gorge ourselves on pulled pork, yummy burgers and whatever else he wants to dazzle us with. Naturally Easter bunny kill kill seemed like a movie we HAD to watch so we did. And what a ride.

The first thing that caught my eye was the little blurb on the back of the UK dvd:

My mind started wandering, giving me the strangest images of sex and drugs possible. What the hell was all that? This could be really odd and really awesome. But then I realized that this was the British Board of Classification speaking, which would likely mean that a naked chick smoked weed and not the rampaging giant mutant clitoris injecting heroin that I was picturing in my head. In the end I was disappointed, there was just snorting of cocaine off naked breasts and talk of drugged molestation. But the movie itself did give me so much more that all I could be angry at was the lame conservatives at the BBFC for their rating.

Easter bunny kill kill with its alluring title is the brainchild of writer/director Chad Ferrin and deals with Nicholas, a retarded sixteen year old who is left at home with her mother’s new lover as she has to work. Remington, who is shown killing a store clerk during the movies first minutes, is quite the douchebag who plays a nice guy when Nicholas mom is around but calls his pedophile drug dealer friend Ray as soon as she leaves and promises the freak some action in exhange for drugs. Remington goes out and gets himself some prostitutes (que the sexualised hard drug use) while Ray starts preparing for his dirty deed. Depraved yes, and now the psychokiller with the bunny mask arrive on the scene killing with much brutality.

One thing that might put people off is the pacing (in fact, one of the people I watched this with started playing solitaire on the phone about halfway through the movie as she was bored beyond belief). Easter Bunny kill kill takes its time introducing all the characters and the gore and violence doesnt start until at least 45 minutes have passed. Personally I didn’t mind since the time spent with the players did what it was supposed to do, it told a story that made me interested in the characters. And those characters, holy fuck. Timothy Muskatell in the role of Remington chews scenery like his life depended upon it, singing hilarious little songs (Hookers and cocaine... hookers! And cocaine... Awesome. I want this as a ringtone for my iphone) and at times sounding like a villain from an old serial, if not for the fact that he is verbally assaulting a retarded kid. David Z Stamp plays the heavy breathing pedophile in very much the same manner and he is a hoot. Ricardo Gray doesn’t really fare that well, his interpretation of a mentally impaired person sometimes borders on the absurd, slightly overdoing it. He never goes crossed the line to over the top and you get used to it. In fact, it really does suit the movies deranged intentions. The other actors do an decent enough job, even though they aren’t as memorably weird as Muskatell and Stamp.

But the real star of Easter bunny kill kill is the writer/director, Chad Ferrin (something he really proved with his next movie, Someone's knocking at the door which is a fucking masterpiece of sexualised hard drug use). He shows a lot of talent in telling this piece of dementia, giving the movie a good flow (apart from a few scenes that could have been a bit more tightly edited such as when the pedophile crawls around on the floor when trying to find the kid which drags on a bit too long) and most importantly: keeping you entertained. The story is distastefully fun and leads to a really far out ending while still remaining somewhat predictable especially when it comes to the identity of the killer. You have to see it to fully get my point. The budget was obviously very low but the filmmakers worked around this in various smart ways such as having the movie take place in a house that is being renovated with all the furniture covered in plastic. An excellent way around budget shortages. The violence is brutal and plentiful; people are drilled, sawed and hammered to death. My favorite scene is where an intruder has his head smashed to bits with a hammer with a short cutaway where a piece of skull messily landing on the floor. Hardcore.

So, if you have any sort of interest in low budget dementia and gore you could most likely be a candidate for liking this. Sure, the overacting, the slow pace and the whole very unsubtle way that the movie pounds in its freaky stuff might be off-putting for the average movie fan but I sure as hell had a deliciously good time.
Upplagd av Jocke Andersson kl. 14:00 1 kommentar: 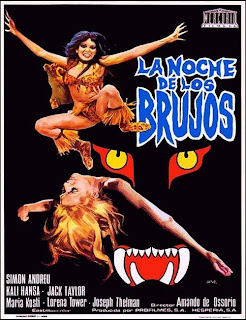 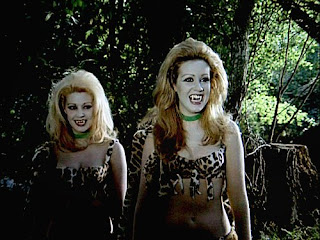 An expedition travels to Africa to investigate the disappearance of elephants in a particular area. When they arrive the local population warns them not to wander around in the jungle at night, especially not around the old sacrificial grounds nearby. For the sake of plot development you know what will happen. It doesn’t take long before the pretty young ladies of the expedition have been sacrificed to a god and resurrected as leopardvampires (meaning they wear leopard bikinis and jump around in slomo). The hero of the movie could probably have stopped all of this early on but he was much too busy boning his girlfriend every time it was his watch. Now he has to stop the evil leopardvampires before it is too late. Or something.

My first thought was that this felt a lot like one of those awful Jess Franco adventure/cannibalmovies. The plot, the environment (a Spanish national park standing in for Africa) and the large number of naked breasts in plain view(including something every movie should have. Nude flashbacks) makes all of this comfortably sleazy and enjoyable. However, this is not the average sloppy zoom fest of Franco, Amando De Ossorios movie is surprisingly well made on a budget that obviously was very low. The photography is good and although there is a shitload of so so day for night scenes it still works well. Maria Kosty, Kali Hansa and Loretta Tovar prance around in the jungle wearing as little clothes as possible which make Night of the sorcerers so much more fun to watch. Simon Andreau does an decent job as the hero who can’t resist putting his penis in his girlfriend even if it means that he endangers the lives of everyone else and Jack Taylor is his usual dependable mustached self as the leader of the expedition. This is a fun exploitationmovie who can’t really be described as good but is still full of yummy goodness. The ritual that is used to create the vampires is particularly sleazy, whipping the clothes of the ladies and decapitating them. I mean, come on. You can’t hate stuff like that. It might be impossible to take the movie seriously due to the leopardwomen that jump around in the jungle in slomo while they hiss. But you do get all gooey and warm inside while watching it.
Upplagd av Jocke Andersson kl. 10:04 Inga kommentarer: 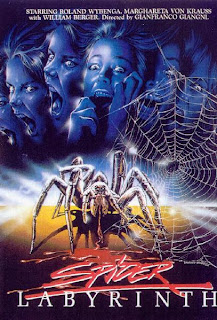 Gianfranco Giangnis Spider labyrinth aka Il Nide del ragno is somehow a rather unknown movie. It is an Italian piece of horror that was released during the end of the great era when Italian exploitation was dying a slow death which resulted in that it didn't get the attention it deserved. A sad thing really since this is an excellent flick that should be more known to horror fans than it is. It might not be a masterpiece but it is among the best of the genre movies that came out in the late 80s.

We meet young professor Alan Whitmore working on a religious science project where people are trying to learn more about a hidden religion that seems to be spread all around the world, yet very little is actually known. He travels to Hungary to meet a professor Roth who has delved into the very same matters and finds him sick, delirious and very paranoid. Whitmore is asked to return the next day upon Prof Roth is found hanging in the ceiling in something that looks like spider web. Roth did manage to leaves some sort of clue and when Whitmore starts to unravel them he realizes that the whole town seems to be in on it, members of some sort of ancient spider cult who wants to keep their secrets out of the public eye.

Italian exploitation that has as much meat and substance as Spider labyrinth are rare. The script is excellent and actually manages to stay away from all those usual leaps of logic that these movies are known for. Gianfranco Giangnis direction is fully concentrated on maximum atmosphere, greatly helped by excellent cinematography and Franco Piersantis score straight out of the Bernard Herrman school of music writing. Fans of cinematic violence get their fair share of stylish grue thanks to Sergio Stivalettis good special effects.

Ok, so I can’t really just pour on with the asskissing here and there are a few nitpicks, the most crucial one is the acting. The lead actor to be precise. Roland Wybenga as Whitmore has a annoyingly droning and dull way of spouting out his lines and he sounds more like spoiled child in the scenes where he is supposed to be panicking. The script is well written but I don’t really understand how such an intentionally slow movie can feel so short. We need more! 10-20 more minutes of exposition would have done wonders for the movie, more background on the Spider cult for instance. These are only minor annoyances, nothing that will destroy your enjoyment. The plot sucks you in and these thoughts only come afterwards, the story moves forward in such an exciting way all towards a fine ending that you don’t care. If you like old school Italian horror then Spider Labyrinth is something you really should track down
Upplagd av Jocke Andersson kl. 16:13 Inga kommentarer: