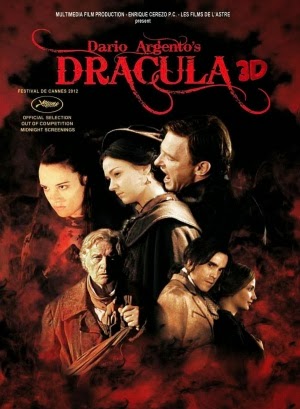 When I first heard that Dario Argento was making his own version of Dracula and casting Rutger Hauer as Van Helsing I was really intrigued. A part of me wanted to think that he could make something special out of this clasic tale of gothic love. Well, that was somewhat of a disappointment.

Not the trainwreck I was expecting it to be but still far from a good movie. It's just so very puzzling how bland and unpersonal this movie is, there is not a hint of the flair that we are used to see in Argentos work. The acting is mostly just awful though it is actually quite refreshing to finally have a Jonathan Harker that is worse than Keanu Reeves. Rutger Hauer is probably the best thing here even though he is in his best Anthony Hopkins mode, phoning it in with poorly disguised boredom. And then there is Asia Argento.. Not only is her performance pretty damn dull, her nudescenes are quite creepy as well. Damnit Dario, what the hell were you thinking?

I could go on and on about the crappy music, the bad cgi straight out of a nineties pc adventure game and a lot of other strange choices but I won't. Fortunately for the viewer there is a lot of graphic violence and gratitous nudity to keep you entertained, it's just that I never for once felt that I was watching an Dario Argento movie. And that is Dracula 3Ds biggest fault. It feels more like a Bruno Mattei movie but without that comfy trashy feeling you get from watching his movies. 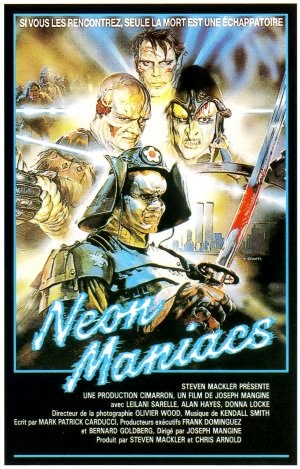 I want to know what the hell was going on inside the minds of the filmmakers while doing this very very odd movie. What kind of drugs were they using? A mixture of several? I'm pretty sure a lot of mushrooms were involved.

A group of mutants live in a tunnel under the Golden gate bridge and come out at night to kill. Every mutant has a single characteristic, like being a doctor, a samurai, a tiny cyclops dinosaur or... What the hell am I writing here? None of this makes any sense at all. Maybe the story came from the scriptwriters six year old son? That would actually make sense. It's like a gallery of someones favorite actionfigures turned into monsters with the flimsiest plot possible attached to it.

Not camp enough to be a classic, Neon maniacs is just strange in a random way, it doesn't feel like they had an actual plan here other than smoking some illegal drugs. Fortunately there are a lot of cool makeup sfx and the movie has barrels of cheese in the shape of horrifyingly 80s pop and heavy metal music. Since parts of the movie takes place at a school dance we get to listen to two whole songs to maximize our enjoyment. Thanks.

And why would a group of mutants that are killed by water live close to water?

And yes, I would buy this on blu ray.
Upplagd av Jocke Andersson kl. 10:31 2 kommentarer: 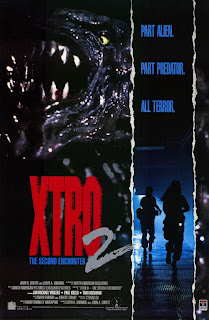 I love Alien clones, it is my favorite guilty pleasure. Xtro 2, having nothing at all to do with the original other than making money for Harry Bromley Davenport, is truly and well a giant rehash of Alien and Aliens, bringing nothing new to the genre except... Well, except nothing. We have seen everything before. Everything. The only thing that Xtro 2 has that Alien or Aliens doesn't have is a visibly shitfaced Jan Michael Vincent looking bored as hell. That must count for something, right? Oh, and motiontrackers. Xtro 2 does not have motiontrackers. But it compensates with a central computer with a female voice.

It has gathered quite a few really bad reviews over the years and I can't really understand why. It is a monstermovie by the numbers with flashing lights, a countdown before everyone dies and a monster that gestates inside a human host but Davenport is a decent director and maintains a good pace and some not too bad camerawork. The editing can be quite erratic at times but I suspect that was due to having to salvage Mr Vincents footage, the few lines he didn't flub. It has a bit of gore and the giant monster is pretty cool as it roams the underground bunker, sometimes changing size (mostly due to laziness from the filmmakers) so that it can fit in the ventilation shafts. Yes, there are ventilation shafts. With flashing lights. Every decent Alien clone has to have flashing lights in a ventilationshaft.

No, this is not a good movie but believe me when I say I have seen a lot worse than this. It does its job, brings an alien monster from another dimension into an underground facility and kills people in semi-gory ways. Sometimes you don't need more than that. Maybe some nudity. There should have been nudity. 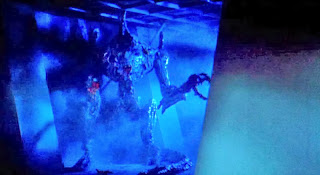 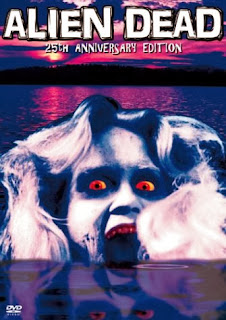 Alien dead is a movie. It has something that resembles a script, a plot about a crashed meteorite that turns people into the undead and a group of actors that can't act. It has a beginning and an end. There are a couple of zombies roaming around a swamp killing random people, including a chick that goes skinnydipping all by herself. This should be enough to entertain but it doesn't. 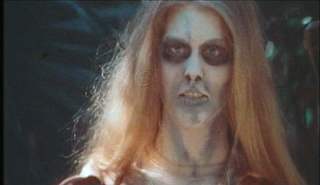 This one makes Oasis of the zombies look like Dawn of the dead. The best thing about Alien dead is that it finally ends after three looong hours. Oh, was that just 70 minutes? Didn't feel like it. My head hurts. A lot.

Cataclysm aka The Nightmare never ends (1980) 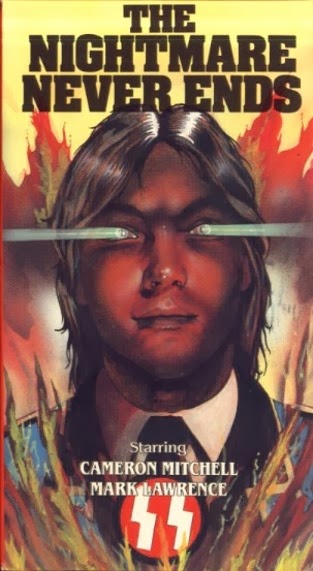 My favorite part of lovely 80s cheese Night train to terror is the final episode where a woman has nasty about nazis and demons and discover an emissary of Satan living on the earth as an immortal. Every story in that movie is edited down from a full length movie which meant I had to track it down and watch it in its entirety. Which I now have done and what a glorious movie it is, loaded with some of the worst acting I have ever seen in my entire life! I bring you... CATACLYSM!

Brilliant surgeon and devout catholic Claire Hansen has dreams about demons and it doesn't help that her atheist husband James has written a book called God is dead that he is about to publish. When watching a show in Las Vegas a psychic "helps" her to a vision where a Nazi officer kills a group of Jews just for fun, this will supposedly show her that evil really exists. While this is going on Nazi hunter Abraham Weiss sees one of his tormentors on live tv, a young man who hasn't aged a day and also happens to be the very same Nazi that Claire Hansen saw in her vision. Weiss enlists the help of his neighbor, Lt Sterne played by the one and only Cameron Mitchell, but Sterne doesn't believe a word of what he is saying. Later that night Weiss goes to the home of the Nazi and is promptly killed by a demon. Now we add another character to the melting pot, Father Pappini, who is convinced that something really really evil is about to go down and is trying to convince James Hanson that what he is doing is wrong. And so forth. Lot's of plot here. It's actually not half bad as far as God Vs Satan plots go. Really.

The one thing that strikes me about Cataclysm is how fucking awful the acting is. It sounds like every actor is reading their lines from a paper, and failing at that. Cameron Mitchell, Richard Moll as James Hansen, Maurice Grandmaison as the priest and possibly Robert Bristol as the evil demon Nazi are the only ones that don't need to feel shame but the rest of them... GOD DAMN! Faith Clift who plays Claire Hansen is so catastrophically bad in this role that milk would turn sour if she read her lines in the vicinity. I watched Night train to terror just a few weeks ago but didn't remember it being that bad (maybe I was swept away by the megacheesiness of the whole enterprise?), could it possibly have been re-dubbed? I need to watch the damn thing again.

But apart from the atrocious acting, Cataclysm is quite a fun movie apart from the fact that the most fun bits (the stop motion demons) doesn't even appear in the original movie, they were shot specifically for Night train to terror. The plot is fairly ambitious and manages to keep you entertained throughout the whole movie with fun, delirious set-pieces up until the deliciously grand guignol ending which quite frankly is a stunner. The version I watched was the one called The Nightmare never ends which supposedly is edited, which might explain the missing violence from Night train to terror (or was that shot specifically for NTTT? I have no idea, I need to watch the extras. I'm a bad boy, I didn't do my research). Code red supposedly has the rights for Cataclysm so here's hoping for a complete version sometime in the future.

Hell yes, I loved this in spite of all its faults. Pun intended. And if you don't have the chance to see this version at least buy Vinegar syndromes wonderful blu-ray of Night train to terror. It's totally worth it. 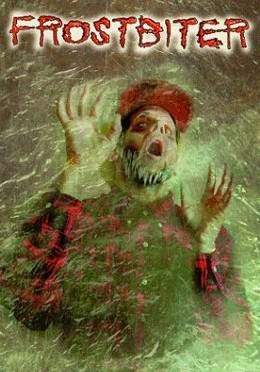 Rednecks accidentally manages to break a protecting circle that releases the evil Wendigo. A group of friends gather in a small cabin to party and suffers the wrath of amongst others: A stop motion Wendigo, Chili monsters, zombies, a naked women that turns into a demon and much more. My kind of plot. Too bad about the movie.

This one really had the potential of being a lovable cheese "classic" in the style of Demon wind or Forever evil but ultimately fails for several reasons. It's not that it isn't entertaining, there is a lot of silly gore and some nudity to liven things up (even some pretty cool stop motion towards the end that is a lot better than I would have expected), the movie is filled with oddball stuff at a fairly breakneck pace but in the end it is just a little too silly. But the single most fatal mistake the movie does is the soundtrack. Every scene is filled with rock/country music complete with lyrics to match the scene and it is just plain GOD DAMN AWFUL! Every time the movie seems to redeem itself with a cheesy gore-scene the music starts up and kills everything. One of the main actors was the guitarist in The Stooges, I blame him. The rest of the actors don't help much either, ranging from fucking awful to barely bareable. Very barely.

It's a shame really, this could have been fun. Frostbiter - Wrath of the Wendigo feels a lot like another rambling schlockfest, namely the weird Winterbeast and if you managed to sit through that one you will probably like this. It might work a lot better if you turn the sound off but on the other hand you won't be hearing the hilariously daft dialogue. I really don't know what else to say about this train-wreck, I wanted to hate it but I can't. I just can't. Watch it with friends and beer. At least it is about a million times better than 1978 Wendigo.
Upplagd av Jocke Andersson kl. 21:57 Inga kommentarer: 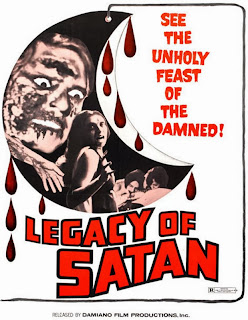 The leader of a satanic cult sets his eyes on a young housewife, wanting her to join the cult and rule by his side. Sometimes you really don't need more plot than that. Not interested? How about a glowing sword? Come on, glowing swords and satanists! You know you want it.