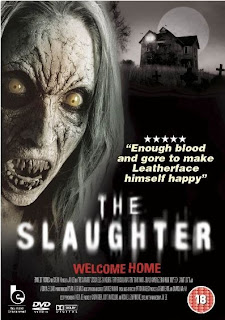 Ok, stop me if you've heard this story before.

A group of EXTREMELY annoying youths arrive at an old house with the purpose of fixing it up in order to sell it. They moan and whine and behave like immature assholes (come on, the guy who spouts crap about the conformist society who bends to the whims of capitalism is quite possibly the most annoying character EVER! And he is one of the leads!). Soon they find a book in the basement, stuff is read from it and something evil is unleashed.

To the credit of the filmmakers, The Slaughter looks quite good for what was obviously a very low budget movie. The location is used well and the camerawork nicely atmospheric. We also get some cheesy nudity and a bit of nasty gore. Unfortunately all of this is destroyed by a really horrible script and a lot of overacting. The Slaughter has a script that wants to be a huge wink to the genre fans, there is a lot of very cheesy dialogue that feels like leftovers from a Scream sequel and none of it works.The actors try their hardest but it just doesn't work and the movie becomes more and more of a chore to watch the further you get.

I suppose I might be a bit harsh on the Slaughter, if this was an 80s movie i had just discovered on a rip from a vhstape then I would be a lot more forgiving. And to tell you the truth, I have seen a lot worse movies. But in the end, this is just a big wasted Meh. You'd do a lot better watching director Jay Lees Zombie strippers instead, the winking there works a lot better.
Upplagd av Jocke Andersson kl. 16:54 Inga kommentarer:

War of the worlds the true story 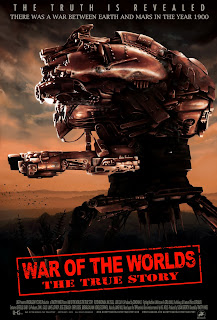 War of the worlds the true story has a fun concept that easily could have dragged it to the bottom of bad movie hell, staging the "true" story of the Martian invasion of Earth in the early 1900:s. Claiming to contain actual, previously classified footage along with newly shot reenactments, WOTWTTS has the aura of a History channel documentary and it actually works reasonably well. We've seen/read/listened to the story before and it is actually a fairly close adaption of the original novel as I remember it with the exception of adding a long interview segment with the last living witness of the events. Earth is pummeled by strange cylinder from Mars that open up and bring forth death in the shape of giant tripods with deadly heat-rays that incinerate everything living. Classic stuff indeed. 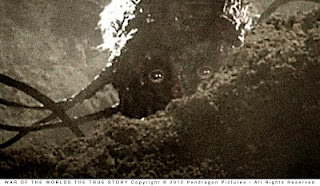 The mixing of newly shot footage along with a ton of archival stuff (they threw in everything and the kitchen sink, we get some pretty recognizable clips from movies) with added heatrays and destruction never actually gels that well, it is fairly obvious what scenes are new. The filmmakers tried their best on a limited budget but degrading digital video so that it is supposed to look a hundred years old is a really hard thing to accomplish and I would go so far as to say that this is a fail. But, and here comes the money shot, it never matters. WOTWTTS is edited like everyone is on cocaine, breakneck is the understatement of the year. The screen is constantly filled with mayhem, destruction and those scrumptious tripods...

I make no secret that I am a big fan of Steven Spielbergs 2005 version. It has a couple of significant flaws such as an overschmaltzy story and Dakota fucking Fanning - the most annoying character ever in a movie but in return we get the tripods that are truly some of the most awesome scifimoviecreations ever. WOTWTTS damn near equals that movie on a budget that probably wouldn't pay for Tom Cruises coffee. Seriously, Timothy Hines and his crew has achieved near perfection in these scenes using only models and it works wonders, I just kept grinning like a six year old watching Godzilla for the first time.

Not everything works of course. Like I mentioned earlier, the "new" footage isn't integrated that well and the whole movie is based around the interview footage which is supposed to be shot in the sixties but just looks like what it is, new digital footage with some pretty halfassed fake degrading. A lot of the actors (most of the smaller roles) aren't particulary good and the english accents are most of the time just awful. But none of this really matters. Those tripods win me over. 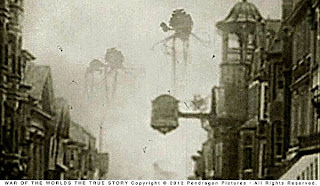 Not a perfect movie by any means, WOTWTTS is a triumph in execution. It just works that well and although the first ten-fifteen minutes of the movie might be a bit hokey, as soon as you see the first Martian crawling out of the cylinder and their tentacles picking up puny humans to destroy, you are hooked. Maybe the movie really is awful? I don't know. I just know that I love those tripods. 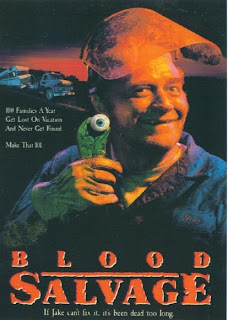 I have a very vague memory of seeing pictures from Tucker Johnstons quirky little movie in what I believe to be an issue of Fangoria, pictures that promised quite a bit of gore, and after watching the movie I feel kind of cheated as the premise is quite fun and could have been turned into a lurid little exploitation movie. Now, I don't really know if this is true, the memory lane is a hazy and vague place so correct me if I'm wrong. I might be confusing this with a totally different movie. Anyway, Blood salvage does not really suffer from this, it is still a fun little movie that just feels a bit too tame for being R-Rated.

The story is simple, we've seen it a LOT in the last twenty years. John Saxon and his family runs into a group of bibletoting rednecks that cause roadaccidents in order to harvest the organs of the victims and the patriarch of the salvaging rednecks decides that curing Saxons daughter of her paralysis is next on the agenda all while cutting open the rest of her family. Ray Walston even pops up in a nervous cameo as a shady guy buying all of these livers and kidneys and whatever.

Tucker Johnston really made a movie that could be considered somewhat of a minor cult "classic", the story is fun and servicably executed and it is a hoot to watch Daniel Nelson spout religious gargles as he removes stuff from living people. Most of the actors does tend to overact a bit, especially the two redneck brothers but it kinda fits the joke of it all. I just wish that it would have been a bit nastier, the scenes in the barn where the Pruitts have quite a large group of "patients" nailed to the walls, only barely alive so that they can be slowly cut to pieces, would have benefited from some grue and kept the movie in peoples minds for many years to come but I guess we can't have everything. A fun watch that might be hard to track down, it is not available on dvd and I sure as hell wouldn't mind a nice dvd/blu with cool extras.

And am I confusing this with another movie? Were there gory pictures from this in Fangoria or is my mind playing tricks on me?
Upplagd av Jocke Andersson kl. 16:27 Inga kommentarer: