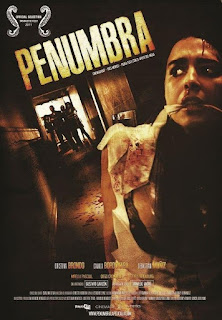 One thing that impresses me a lot is when filmmakers manage to pull off a scenario in a confined space such as just a room or as in Adrián García and Ramiro García Boglianos Penumbra; a rundown apartment just an hour before a solar eclipse. Another impressive gimmick that the movie uses is that the story evolves in real time, everything unfolds during 90 minutes and although it is not entirely successful for reasons I will discuss later, it is still fairly skillfully orchestrated. Also, I am a sucker for thrillers with an occult tint, which means Penumbra fills all these three quotas.

Marga, a Spanish woman working in Buenos Aires for two months every year, is trying to rent out an apartment that she and her sister owns. She meets who she thinks is the potential customer outside the apartment but is a bit ticked off by the man, but relents as he offers her four times the rent as long as they can close the deal immediately. More and more odd people arrive as they wait for the real client and Marga starts to get more and more suspicious. All of this takes place just an hour before a solar eclipse and we in the audience know that something is about to happen.

The Bogliano brothers’ does do several things right, the story is both interesting and full of black comedy. It may not lead to any mind bending revelations in the end, but does manage to hold you in its grip for the entirety of the movie which is fortunate since there are a couple of nagging mishaps on the way. First, and most off-putting, the character of Marga is not quite someone you root for. She is basically a prejudiced asshole, rude and hostile towards everyone "beneath" her. She is, quite frankly, a bitch and it is VERY hard to actually care about her enough to make you want her to survive. The pacing is a bit off as well, the movie takes its sweet time getting to its inevitable conclusion. This would probably have been a good thing if you didn’t spend so much time wanting Marga to get shot in the head. Heck, even the weirdoes wanting her apartment have more pleasant personalities, albeit with a more sinister agenda on their minds. Marga just wants lots of money and to hook up with her lover, a married man.

Ok, so the lead is hard to like and it moves at a sometimes slow pace but Penumbra is still a decent thriller that holds its tension until the end. I'd definitely recommend it, just try not to hate Marga too much. 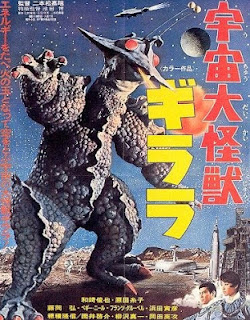 Truthfully, Uchû daikaijû Girara is not a very good movie. It has a bunch of bored looking actors slumming through a not particularily well written script and a lethargic pace that takes forever getting to the kaijuaction. You know, like watching porn where the hardcore action doesnt start until 45-50 minutes into the movie. Ok, so this movie isnt exactly that bad but watching Peggy Neal laugh uncomfortably in that very odd lovetriangle that takes up way too much of the movie isn't really what I call entertainment. Fortunately all of this is redeemed 100% as one of the more insane japanese rubbermonsters makes its appearance - Guilala. A weird fusion of reptile and chicken with a pair of dangling antennas on its head, it really has to be seen to be believed. From there on it's groovy mayhem just as we like it, mass destruction galore as Guilala spawns from a strange object found in space and efforts are made to find a way to kill it. The sfx arent maybe up to par with Tsuburayas best but they're fairly detailed and there is a lot of them.

Yeah, not much of a review, I know. X from outer space is sillier than most Gojiras and Gameras but once you get past that slightly dreary first half it is good fun and recommended to all fans of Kaiju. The new dvdrelease from Criterion, part of the boxset When horror came to shochiku, is to my knowledge the first proper dvd outside Japan and while it might not be referencematerial (the image is a bit soft) it is still the best one I have seen to date and has both the awful dub and the original japanese language with english subs. All fans of Japanese monstermovies need to own this set, especially since the other movies in it are great fun (When writing this review I have not watched Genocide. Review coming soon). Go out and buy it. For Guilalas sake.
Upplagd av Jocke Andersson kl. 11:45 Inga kommentarer: 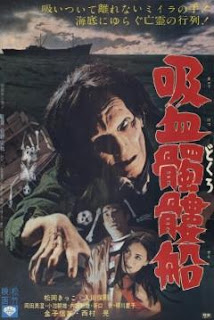 Kyûketsu dokuro-sen, aka Living Skeleton starts of with a bang as the crew and passengers on a boat are murdered by a group of bloodthirsty pirates, giggling with glee as they mow them down with a stream of bullets. Three years later we met young Saeko living in a church, thrown into depression after that her twin sister Yoriko vanished on a boat journey (We all know what happened of course). She has found love in the form of Mochizuki but her slowly evolving happiness is halted on a diving trip when they find a cluster of skeletons chained to the bottom of the ocean. Later that night a mysterious boat comes into the harbor and Saeko boards it, believing that her sister is on it and after meeting what appears to be her ghost, Saeko begins a journey of vengeance, tracking down the pirates one by one and killing them. And then it gets weird. 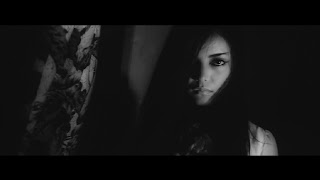 This lovingly atmospheric gem of a movie - cowritten by Kyuzo Kobayashi, who also penned Goke bodysnatcher from hell - is quite an oddity, starting out as an eerie ghost story as Saeko (possibly possessed by the ghost of her sister) kills the pirates one by one in a series of groovy setpieces, nothing out of the ordinary when it comes to Japanese ghostmovies. But then, two thirds into Living skeleton, there is a twist and the movie turns into something stranger and more gruesome, and makes it an altogether more enchanting experience. I wont discuss what happens (no spoiling on my blog!) but this sparks some slightly perverse events (necrophilia and acid is involved) and the last half hour is great, gloopy fun that makes the movie stand out a bit more than expected. All of this is framed by scrumptious looking b&w cinematography and although all the mayhem towards the end would have looked good in technicolor red it suits the mood perfectly. Heck, even those not-so-anatomically-correct skeletons that make a couple of appearances look good in black & white. Yes, I consider this a gem and the final reveal on the ship makes the movie worth watching all by itself. Good, eerie fun. 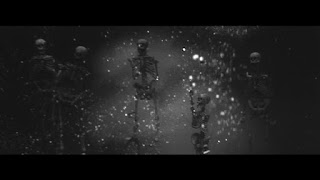 Living skeleton is finally out on dvd, in the Criterion release When Horror Came to Shochiku along with silly beyond belief kaiju X from outer space and the awesome Goke - Bodysnatcher from hell and this is a boxset you need to own. Now. Go and get it.