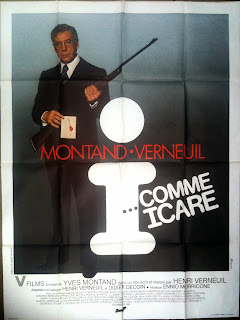 One might not think it from reading the reviews of this blog but one of my absolute movie genres is the conspiracy ones, especially from the glory days of the seventies when masterpieces like Three days for the condor and The Parallax View appeared on the scene. There has been a few later ones (like the fun mockumentary The Conspiracy) but nothing that came close to the awesomeness of back then. So it was truly a treat to finally have a chance to watch the legendary I... comme Icare, a French take on the Kennedy assassination and I'm happy to say that this is one of the best conspiracythrillers I have seen to this date.

The movie starts with a gunman preparing to kill the president of an unnamed country from the roof of a high rise tower but when the moment comes he does not have the guts to pull through, though someone else does and the president is murdered. As the failed assassin makes his way out of the building he is shot in the face and killed and when the police arrive the whole thing looks like a suicide. An official report is produced and the conclusion is that the gunman was alone, though one of the members of the inquiry comes to the conclusion that he cannot agree with the verdict. A new inquiry starts and the evidence starts to point to something entirely different. And the name of the Lone gunman? Karl Eric Daslow. Rearrange those letters a bit.

Wow. This is one hell of a thriller. The best thing about I... comme Icare is the fact that it is cold and clinical in its methods and ways to take us into the web of the conspiracy. There are no random events, no coincidental happenings that help the protagonists to uncover the truth by chance. Just methodical policework which makes everything seems so much more than just a movie, it brings you into the story and delivers what this kind of movie needs to be successful. Realism. No matter what your opinion is on the Lone gunman theory of the Kennedy assassination, this movie takes that and makes a damn fine (and plausible) movie out of it. Yves Montand is superbly dry as State attorney Henri Volney and sometimes it feels more like he is hosting a documentary instead of acting the role of someone digging up the dirt. We even get legendary porn starlet and Jean Rollin actress Brigitte Lahaie in a small role as one of the witnesses of the real shooter!

I... comme Icare is truly one hell of an exciting thrillers with several nailbiting sequences of stomachchurning suspense and an excellent methodical pace that make the two hours running time flash by in an instant. As of this writing the movie is to my knowledge not available on an englishfriendly dvd or blu ray (there are fansubs out there) and I truly hope that it will be in the future, this is a movie that needs to be seen.
Upplagd av Jocke Andersson kl. 12:13 1 kommentar: 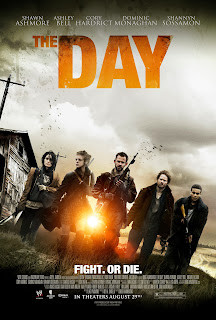 This was actually quite a nice surprise, a movie that I hadn't heard much about but seen in numerous sales and bargain bins in the last few years, something that usually spells trouble. To my pleasant surprise The Day turned out to be something very entertaining. The story isn't anything special, basically a post apocalypse version of John Carpenters Assault on precinct 13. A group of survivors hole up in a small house in abandoned America and find themselves in what is actually a trap, one of many similar locations that a band of cannibals use to find their food.

The Day does have one flaw and that is the script. While the story is simple to the extreme it is efficient enough as it set its events in motion leading up to the very bloody siege. So far so good but the problem is that most of the characters are thin to the extreme, though well acted. Not all of them, Ashley Bells Mary is quite an intriguing one but apart from her and Shawn Ashmores Adam we never get to know any of them other than basically their names and the fact that they knew each other before the apocalypse. This makes it somewhat hard to root for any of them but thankfully the movie is tense enough and filled with a shitload of graphic violence that it never becomes a major problem. And for the gorehounds out there you will have plenty to enjoy. Mostly cgi but well done, nothing ever struck me as looking odd or particulary artificial.

The cinematography is another thing that might be a weakness or even a strength, depending upon your own preference since it almost totally devoid of color to ensure maximum bleakness. Some of the scenes feel almost black and white, like back in the old days when you collected dupes of uncut horrormovies and received one that had been copied so many times that there were only tiny flickers of blue and green at times. I kinda like it, it suits the movie.

So what I am saying here is basically that you shouldn't go into this expecting anything that will blow your mind away, just a exciting and very violent post apocalypse movie. The original script had zombies instead of cannibals which tells you a lot about what the filmmakers were going for. Good, gory and colorless fun. 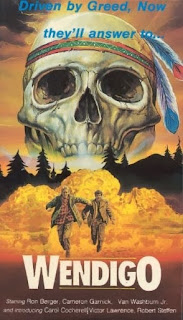 One of my all time favorite short stories is Algernon Blackwoods marvelous Wendigo, telling the chilling story of a hunting expedition that has a pretty nasty encounter with a demon from native american legend. I've known for a long time that there was a low budget movie based on it but never got around to watching it. And now that I have I almost wish I hadn't.

This movie is dull. D U L L. We follow a group of rich people traveling into the wilderness along with a frecnh canadian called DeFago (who has THE worst french accent ever. The rest of the world should apologize to Canada for this travesty) for some hunting and relaxation. They walk around, talk a lot about a supposed native american treasure but nothing happens until basically the last ten minutes when the Wendigo starts tearing people apart after setting them on fire which is actually a pretty nifty effect in all its cheapness. And that effect is just about the only fun thing about Wendigo. It happens twice and lasts for about two seconds total screen time. The rest of the movie is awful acting and waves upon waves of mindnumbing boredom. The Wendigo itself is a handpuppet straight out of the muppetshow that we are only shown glimpses of, though enough to shake your head at and mock it.

Has the movie anything going for it? Anything to make you go "well, they did actually do that pretty well"? The answer is NO. Wendigo is just a big bore. To spare you for the pain, here goes:

Everybody gets killed by the handpuppet except for Billy, the native american. You don't need to thank me. And as a bonus you get another look at the Wendigo during the credits to ensure that you see how silly it looks.

Now go read the short story instead. It is a classic. The movie doesn't really deserve to be mentioned in the same sentence.

Trivia: In one scene one of the characters can be seen reading a novelization of a movie called Savage water from the same director. I've heard that it is supposed to suck equally much ass as this one. I suppose I need to see it now.
Upplagd av Jocke Andersson kl. 12:36 2 kommentarer: 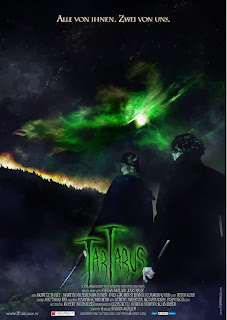 Austria, 1813. Two soldiers are on their way home to a small village in the mountains where one of them has a cabin that belongs to his family. They arrive and settle in, both suffering trauma from the horrible war. During a trek in the woods they come upon the mangled remains of a gypsy bearing wounds that clearly aren't made by any animal they know and during the night they are attacked by some kind of creatures, intelligent beings that leave a message. They want something from the men. Females to mate with.
For such a low budget movie (40 000 euro, about $55 000) Tartarus does several things right. First of all, it really manages to capture the beautiful mountain landscapes and gives you that sense of isolation that this kind of movie needs to be successful. Some of the mountain vistas are truly stunning and although the dark woods might be just a little bit overlit during the nightscenes, they are still nicely full of dread. The sense of period is also done well, especially for a fairly low budget movie like this, something that could've really killed the movie if it hadn't been done properly.

Then we come to the maybe not so good things. The script for instance. The story is sound, pretty damn dark and interesting but could easily have been trimmed down at least twenty minutes (it's 106 now) to make it a leaner experience and the first half has a pretty damn slow pace. The acting is also not particulary thrilling,  the leads are both fine but some of the lesser characters are not so much acting as more stumbling through their lines. Not enough to take you out of the enjoyment of the movie, just enough the lower the grade ever so slightly.

The horror bits on the other hand are mostly done well, even though the filmmakers chose to show very little of it for what I assume to be budgetary reasons, which is a damn shame. There is a great scene half way through the movie when one of the main characters find the cave where the creatures have been taking their prey and has to hide in a giant pile of mutilated bodies, only to find that one of the victims is still alive and will most likely make the creatures aware of him being there. The choice he makes here is pretty much telling of the morals of the characters here, they make a couple of not so good decisions that I won't go into for spoiler reasons.

So, in short, Tartarus is a decent enough little scifi/horror (yes, the creatures come from space. You get to see that during the credits) that could have used a lot more work with editing and little more on-screen grue. It's flawed but I liked it though I would understand why it might be a test on other peoples patience, people who aren't prepared to give kind of flick the patience it deserves.