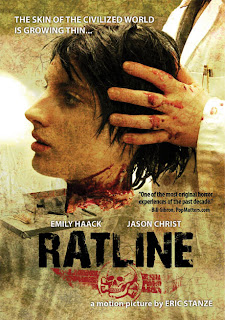 A movie with the following plot HAS to be included in a serious dvdcollection, there are no excuses:

Before the fall of Nazi Germany, the most sacred relic of the Nazi party, the Blood Flag, went missing. This cherished object possessed supernatural powers, infused by the occult experimentation of the SS Paranormal Division. The flag's current condition and whereabouts are unknown. Today, the search for the missing Blood Flag is on, and one man - with diabolical intentions - is getting closer to its hiding place. The flag is about to be unearthed - with nightmarish, blood-soaked consequences.

I admire Eric Stanze and co-writer Jason Christ for the talent and the guts to try to try to pull something like this off on an obviously miniscule budget and the result is very satisfying. The movie's biggest strength is the well written script that tells a fun story way better than a lot of crap that actually gets released these days. The strands of the story (all actually a bit goofy but perfect for a movie about lesbian killers, satanists and nazi experiments) come together in a fun climax and the only thing I wish is that the movie had had a larger budget, the material calls for even more outrageous stuff. Still, Stanze is a talented director (I mean, he actually managed to make Savage Harvest, a shot on video Evil dead clone, into something really entertaining) and fills the movie with so much gore and nudity that you cannot help but like it all. Seriously, the first half hour is truly superior goresoaked and boobfilled glory, I love it. Especially when the goreeffects are as good as these. If you match this with some above average acting from actors you've previously seen in several Stanzemovie such as Emily Haack from Scrapbook, you are really in for a ride. This is a movie that really warrants a sequel. Recommended.
Upplagd av Jocke Andersson kl. 12:29