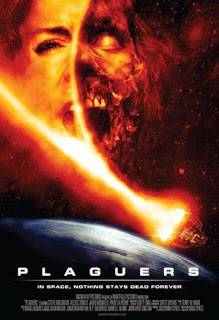 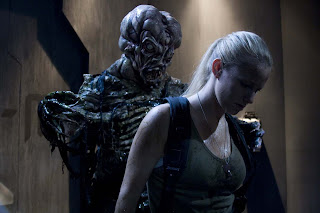 The only thing that comes even remotely close to my fascination for japanese rubbermonstermovies are Alienclones. You know, movies that take the story from Alien or Aliens only with one percent of the original budget and talent. Sometimes it works really well, Forbidden world and Galaxy of terror are great examples that ramps up the gore and the sleaze. Most of time it does not work very well. Like most of them. Ok, so how about Plaguers? Somewhere in between.

With the help of some pretty lousy digital effects we find ourselves on a spaceship heading towards Earth. The crew (consisting of a bunch of actors that look like they came straight from the set of a erotic thriller made for cable) has a strange green orb that they plan to smuggle through customs when they arrive but their plans are waylaid by a group of psychopathic piratenurses pretending to be marooned. They kill the pilot and hijack the ship and before you know it, one of them has stuck her pretty little head into the green orb, turning her into something straight out of Evil dead or Demons. The rest of the movie is pretty obvious. The crew gets smaller and smaller, while the alienzombies increase their numbers, all in the name of good fun.

No, the story here is nothing new, a collection of stuff we've seen hundreds of times before thrown together in a large, seething cauldron of clichés. But Brad Sykes, writer and director, adds something to the dish that more filmmakers should embrace, namely love for the genre. The silliness of the whole affair just make you enjoy everything more when you realize that everyone is in on the joke. The actors are way better than expected, especially since I was assuming that all of the them were just two softcore sexflicks away from making hardcore porn. The only known actor here is Steve Railsback and he wildly goes from looking bored or having fun, I dont really know what was going on there but hey, it is always great to see him in a movie. The digital effects are weak, looking like someone was making his own fanversion of Blakes 7 on an Amiga 500, but the filmakers compensate with some really good setdesign. The makeup effects are awesome with some cool looking zombies/aliens and although I could have gone for a bit more gore, there are some fun scenes to look forward to. Brad Sykes should be commended for what he has done, this is some great fun.
Upplagd av Jocke Andersson kl. 12:00