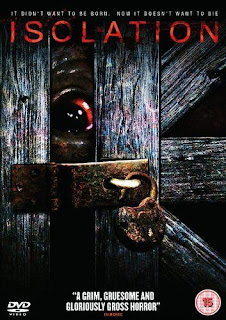 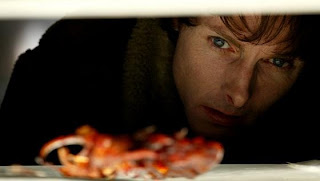 Here goes: On a remote farm in Ireland, John "It feels like an alligator" Lynch has agreed to take part in an experiment not exactly sanctioned by the government, doing some strange stuff to his cows. A vet is bitten by an almost fully grown calf still inside the womb and when it eventually emerges it is very agressive, attacking its mother again and again. They decide to euthanize it and discovers a couple of pretty nasty things about it. For starters, it was actually pregnant even before being born and those fetuses were horribly deformed, their bonestructure being on the outside of their bodies. Of course, they are still alive and very dangerous, not to mention the infection they spread with their bites...

This movie really kicks ass. It is basically an Alienripoff but the story and atmosphere is clearly more influenced by Carpenter and Cronenberg than Scott and Cameron. For a first time director, Billy O'Brien shows a lot of talent. His craft is incredibly good looking and moody, taking its time to let the events of the script play out in a slow, orderly fashion perfect for the movie. There is no action here, only sharply defined plotstrands and it is only towards the end that it begins to unravel slightly when the movie turns into something resembling your average "chased by nasty monster" flick, only on a farm. And cooler. If you thought that the concept wouldnt work, think again. Just the fact that all of this is set on a run down, cold as hell remote Irish farm makes it worthy to be a part of your dvdcollection. The only negative things I can say about the movie is that the script does go a bit cliché towards the end, with lines in the vein of "if they get out of here thousands of cows will give birth to hundreds of mutants each and then it will be the end of the world, bla bla.". When the movie is so dark, dreary and otherwise fresh and original, dumb dialogue like that just pisses you off. The minimalism that has worked so well up until then dissipates somewhat. Not so much that it takes away the fun of it all, but gives you a sour aftertaste when you keep thinking about it afterwards. I know I did.

Ok, a few overused lines wont destroy a movie when it is as well made as Isolation is. The wet, cold and windy environments are perfect for the story and the mutant is a well designed little critter, just as nasty and disgusting as we want them to be. The actors are excellent (John Lynch is always good, no exception here) and if O'Brien had polished his script a bit, this would have been a masterpiece. As it stand now, it's just a fucking good movie which I recommend to everyone that likes a good monstermovie.
Upplagd av Jocke Andersson kl. 08:19