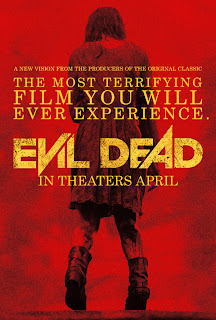 So, it is finally here. The Evil dead REMAKE. The internet have been as usual, a lot of people behaving like spoiled children, screaming that THEY CAN'T DO THIS! WE WANT BRUCE CAMPBELL! Personally, I am not that big a fan of remakes but ever since I was positively blown away by Zack Snyders Dawn of the dead I'm keeping an open mind.

You know the story, a group of youths are going out into the woods for the weekend, the difference being that in the original they were partygoers and now they are having a kind of intervention, helping a friend (Jane Levy) to kick a drughabit. It doesnt take long before they find a mysterious book in the basement, someone reads a passage out of it and demons are released. You dont need to know more, it is all there and very recognizably so. The variations from the original story aren't major but enough to make the story interesting. Some of it is good (the whole kicking the drug habit is somewhat fresh, it gives the movie just a bit more edge, as it just might all be in the head of Levys character) and some of it is not (the backstory about the demons, but more on that later on in the review). but there is enough of it to make the story feel somewhat fresh. We even get a bit of a twist towards the end that I did not expect and it is a fun one too.

So, let us start with the bad stuff. First of all, and this is a pet peeve of mine, why do we have to have an explanation of what is going on? Why do we need to know all these details about the demon? Does the screenwriter think that the normal moviegoer is stupid and needs to have things explained in detail in order to understand the intricate ways of a plot that mainly is about dismemberment? Ok, so I am exaggerating a bit here, Evil dead is nowhere near the worst offender of this crime (#1 on this list is the American remake of Ringu) but the original did it so much simpler and better. We don't need to know (with illustrations) that there are three ways to kill the possessed, we just want to see the characters trying to survive as ferociously as possible! I want my own mind to fill in the blanks, not to have them filled in by the screenwriter with a dull hammer (which could have been put to better use in the movie itself as a way of inflicting even more grue and gore). This is only a minor flaw of the movie though, I'm just pouring out some old hate towards Hollywood. The movie moves so fast that I never had the chance to be upset about this until after it was finished. I could also bitch about the fact that some of the characters are somewhat undeveloped, mainly the leads girlfriend who is a blonde chick who we never have a chance to get to know until *SPOILER* she is torn to pieces in a long, delightful sequence with several nods to the original movie. *END OF SPOILER*. But then again, she really is just there to be dismembered violently. (oops. Forgot the spoilertag).

So, the good bits? Most of the god damn movie. As i mentioned before, it moves like lightning and the brief scenes of setting up the scenario are over before you can say Bodily dismemberment and as soon as the words that are used to summon the demon are read, we are way in over our heads of blood and nastiness. There is a lot of violence and it sure as hell is really red and painful, most of it actually old school practical stuff (there is a scene of the remnants of a chopped off arm that looked suspiciously CGI but if it's not, kudos to the makeup artists). All of the actors are good even though some of the characters are thin and they serve the script well. Fede Alvarez does an excellent job setting up all of this and the cabin itself is a marvel to behold, surrounded by a dark and gnarly forest that works wonder with the atmosphere. To top it all off we get those cool last ten minutes that follow a slightly cheesy moment (the only one actually) and what we have is a solid piece of gore.

I realize I spent more time writing bad stuff than good, but don't let that deter you from watching Evil dead. As remakes go, it is up there as one of the better I have seen. It does not reinvent the wheel but it serves up its images with style and relish, giving us a nasty piece of horror that stands fairly well together with the original. It does keep its horror dark and serious which I personally like a lot. Good stuff indeed, and I really look forward to getting it on bluray (fingers crossed for even more gore!). Recommended. 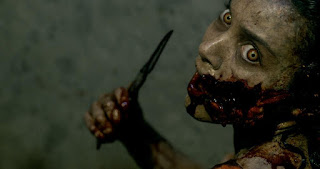