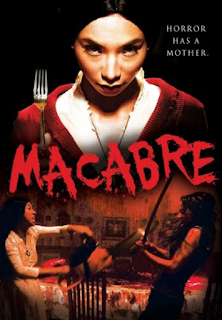 ﻿
Macabre is quite an oddity since it is a very violent and gruesome movie, coming out of a country that is predominately Islam, something you rarely see in cinema today. It seems to base it's reasons of horror firmly in the legacy of the Dutch colonialism of three and a half centuries which is actually quite refreshing, although it actually only hints of this.

Plotwise this is nothing new, on the contrary. We follow a group of youths travelling by minibus through the countryside as they almost run over a young woman in the middle of nowhere. They take her to her house, an old mansion, meet her slightly odd family and reluctantly accept an offer of dinner. The family of four, three grown children and the matriarch that oddly looks a bit too young for her age, soon show their true colors. They want the youths to die. Horribly.

The story is really old, we have seen it hundreds of times. The good thing about Macabre is the way the filmmakers treat it, infusing an extra creepiness in the villains that are more uncomfortable than the usual gimmicky buffoons that we mostly get to see in this type of movie. I won't go into discussing the vague reasons behind all of this but believe me when I say that they are truly horrifying in their ambiguity. The matriarch herself (Shareefa Daanish chewing her way through the scenery with great fun) is a marvel of death and torture and her children aren't far behind in maliciousness. The violence is bloody and hardhitting, just like we want it and combined with fluent direction we get a movie that rises way above its kind. Damn I want a sequel now! 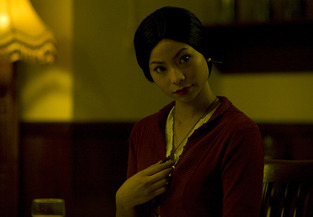 One of the reviews I found online (can't remember which one, sorry. Might change this text when I remember) summed this up fairly well: Think Frontieres in Indonesia, and this is a good description although I rate this much higher. It isn't really anything new but the treatment is still interesting enough to give this my highest recommendations, it really is that well made.

Thanks Fred over at Ex-Ninja for recommending this movie, NOW HOW ABOUT WATCHING LAKE MUNGO THAT I'VE TALKED ABOUT FOR YEARS?!
Upplagd av Jocke Andersson kl. 19:00