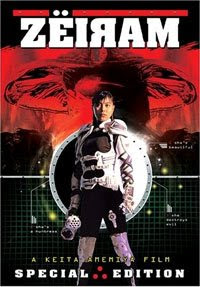 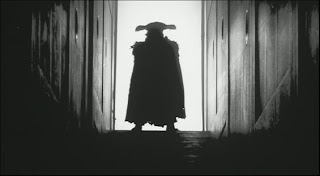 Zeiram is an awesome dude. He/she looks like the lost brother of Gigan and the fungusmonsters from Ishiro Hondas wonderful Matango (and if you're not into japanese monstermovies, a proper description would be that Z looks like John Wayne designed by H.R Giger.), wears a cool cape and wields a gun that looks like the chestburster from Alien. Enhancing the awesomeness, Z also has the ability to spit out cocoons that burst into weird critters hunting it's victims. And it gets even better! After taking a full frontal hit from a bazooka, Zeiram turns into something large and spidery, and it doesnt stop there! Zeiram is not just an awesome bad guy, it is one of THE awesomest. This japanese scifi/monstermovie is full of so much bubblegum entertainment that I almost exploded from watching it. It is that fun.

So Z heads to Earth followed by a couple of bountyhunters (robobrain Bob and cute Iria). They plan to set up a trap by enticing Z into a virtual arena, a duplicate of a small japanese town but of course, nothing ever goes as planned as two electricians are drawn into the arena after investigating a rather large power surge. Let the mayhem begin!

The movie starts with a really cool black & white sequence where Zeiram slaughters his/hers/it's way through a couple of dozen soldiers. Arms, legs and faces are turned into mush just to show the audience what a badass Z is. Things do slow down a bit allowing some characterdevelopment to take place, but as soon as Zeiram arrives on Earth, we get a nice rollercoasterride. Imagine the final 30 minutes of Terminator, Japanese style. An evil alien that can take a lot of damage, can be blown into little pieces and still be dangerous and finally turn into something straight out of The Thing. All of this is accomplished with lots of fun sfx, stop motion, full size puppets and good old make up. The only issue that I have with the movie is that the glorious massacre in the beginning is never repeated, the flick basically has a cast of three but thanks to all the different faces of Zeiram this doesnt make the movie any less entertaining. I would have liked some more gore, but the presence of Z is enough. This is a funfilled ride of a movie with loads of stuff to smile at and enjoy, especially with cutie Yuko Moriyama in a cybernetic bodyarmor that has no protection whatsoever for any vital parts. Z even has a strange penis-shaped tentacle with a female face instead of a dickhead. Awesome.

And there is a sequel too!

Seriously, if you have any love for japanese monstermayhem, you will love this.
Upplagd av Jocke Andersson kl. 08:14