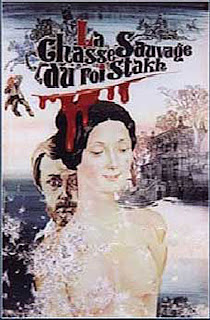 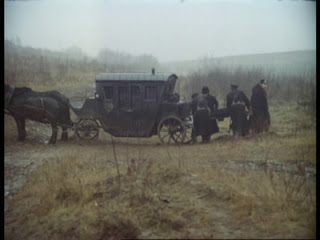 Seriously, I dont really what to make of this movie. It is a Russian gothic fantasy horror that plays like a mixup of The Blind dead series, Hammer and Tarkovsky. It is wonderfully designed and shot, a true feast for the eyes but thanks to a overly talky and pretentious script it becomes quite hard to keep up your interest.

A student traveling through some remote parts of Russia during the 19th century is on a quest to write down all the different myths and legends of the region and arrives at Marsh Firs, an old castle out in a swamp. He meets the neurotic owner of the castle who tells him about three legends of the are, The Little man, the Blue lady and the Savage hunt of King Stakh (an ancient king who was murdered by his best friend and now roams the swamp looking to kill any descendant of that very friend), and of course - the curse on her own family. The castle and the surrounding marshlands are littered with strange characters and during his stay our hero desperately tries to survive all their odd machinations as people start to die after telling him about the Savage hunt of King Stach.

I dont really know what genre I should put this movie. The best thing about it is the design of the sets and the cinematography, it oozes Mario Bava and Terence Fisher. Or maybe if Tarkovsky made a remake of the old Hammer favorite Hound of the baskervilles? The environments of the castle are striking, pervaded in a gothic atmosphere with halls overgrown with vegetation or having lost to the waters of the marshes and are now flooded. The wet and cold marshes is a character in itself and the atmosphere cant be cut with a knife. The scenes with King Stakhs riders roaming through the land are supremely surreal and makes you think about Amando De Ossorios Blind dead series. The problem with the movie is that all of these ingredients, the horror and the fantasy are only a small part of something else, something that would be more suited for a small room full of pretentious moviewatchers drinking wine in their Fassbinder t-shirts, not uttering a word until the movie is over. There are droves of heavy, doomladen philosophical dialogue without any obvious connection to the story and all of this becomes clear when you watch the dvdextras where the director clearly states that he wasnt interested in doing a fantasy/horrormovie. But on the other hand I will admit that it is impossible not to be drawn into this macabre world thanks to the visuals, the good acting and the interesting story. It requires patience. And the reward is a movie you most likely will never forget.
Upplagd av Jocke Andersson kl. 08:40