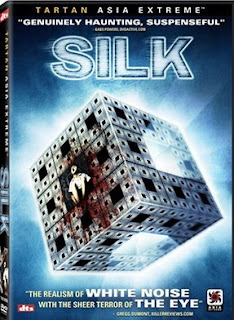 I loved Hideo Nakatas The Ring and Dark Water when they arrived on the scene back in the early 2000s and spent a lot of time afterwards soaking in all the spinoffs and ripoffs that poured in from every asian country imaginable, and then some. It didnt take me long to realize that most of them were pretty awful and that fact was sealed when the american remakes started dropping in one by one. So, I gave it up. I watched a Grudge sequel or two but never with any real joy. But then I found Silk. And a bit of hope for the genre. The filmmakers takes a concept that has been milked dry and twists and turns it around a bit with a bit of intelligence and voila! We have this fine piece of entertainment.

Silk stars The Menger sponge, a mysterious proteincube that a Japanese/Taiwanese team of scientists uses to catch a ghost, a sideeffect to its real purpose - creating antigravity. To learn how to master the powerful energies that the ghost emits (that they need to create the an antigravityfield) they need to study the ghost, a small boy, and learn how he died - and why. The team keeps him sealed up in a glass chamber and they study him constantly trying to make sense of his daily, very repetetive routines. They notice that he is talking to himself and bring in a young man with a few skeletons in his closet named Wang, an expert on reading lips. Now they need to find out who the boys is, why he died and why he kills anyone who looks him into his eyes.

The movies first half is top notch when it deals mostly with the science behind all this and the mystery surrounding the ghostly boy. All of this is handled subtly and with quite a bit of intelligence without gorging on the usual jumpscars - even though it has those too. Chao Bin-su, the writer and director of Silk also made Double vision, another really well made Taiwanese horrormovie with supernatural undertones and you have the same moods here. It feels fresh and interesting to focus more on the somewhat sad detectivework trying to find out more about the boys history. Together with good direction, strong acting and excellent camerawork we get a very competent chiller with brains instead of brawns that you watch with great fascination. Silk is a horrormovie of excellent quality that does weaken ever so slightly towards the end where it cant contain itself and goes into a more full on horror spree but it still feels a lot more fresh than the usual Ringu ripoff thanks to the lovely story. A very good asian horrorflick that I really recommend to fans of smart horror and is hopefully a sign that the genre isnt dead. A doublebill with this one and Japanese Noroi - The curse would be an excellent evening.
Upplagd av Jocke Andersson kl. 10:00