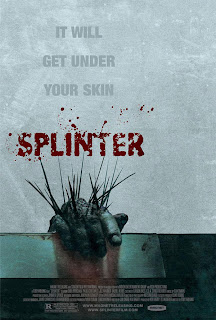 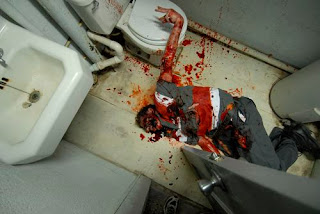 In these times of failing economies, religious strife and a general contempt for human life and dignity, it is nice that we all can agree on one thing. There can never be enough parasitemovies. To enhance the general quality of life as we know it we need more movies with strange lifeforms that takes over and changes human beings in ways that are as painful and gory as possible. When you ponder the masses of weird lifeforms in mother nature (and our bloodstreams) there should be about a million potential movie scripts out there. But as usual we get a shitload of crappy remakes instead. Thank you very much Hollywood.

Onto Splinter, which actually is an excellent example of a good parasitemovie. The plot is simple, almost waferthin but effective enough. Its only function is to bring people to an isolated location (in this case, a petrolstation) and let them try to survive the mayhem of a nasty parasite whose only purpose in life is to kill. And assimilate of course. The Slinter beastie is a very nice creation that absorbs its victims into a snarling heap of twisted limbs straight out of John Carpenters The Thing and the infection itself can be very painful, both for the victim and the audience who has to watch bones break in very excrutiating ways. It is a simple concept that works wonders for monsterlovers like me and the practical effects are marvelous. I also love the fact that we never learn the true reason for the parasite and just accept it for what it is: A hungry creature. The acting is another strong point, they do a good job with the material they have and actually behave fairly intelligent except for a slightly goofy sequence toward the end where they are trying to outwit the beastie using cold but it is only a very minor annoyance, the sequence works tensionwise but is a bit silly. I do have a bigger beef with the camerawork where the camera is all over the place a lot of times. It's like an manual on how not to use shakeycam which means that we dont get to see the parasite as much as we would like to. A choice of the filmmakers I assume but it gets annoying as hell at times. But that is about as negative as I can be towards Splinter and it does not detract from the fun of it all, just lowers the grade from Awesome to Really good. It is a fun and gory flick full of excitement which I really recommend and wouldnt actually mind to see in a sequel or two.
Upplagd av Jocke Andersson kl. 09:28