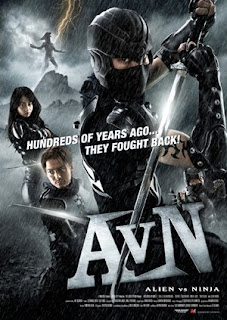 This one has been getting a lot of bad press, people complaining on cheap effects and it's overall silliness but it seems to me that everyone is missing the point of it all. It's supposed to be cheap and cheerful, just like the grand old tradition of Kaijumovies in Japan. Because that is what it is, not another one of those movies that has followed the success of Machine Girl and Tokyo Gore Police. This is plain and simple Kaiju, with added gore. And it is entertaining as hell.

The plot is basically a ripoff of Predator with a bunch of ninjas heading home through a forest after a mission being hunted down by some sort of tentacled aliens that implants tiny aliens in the throats of the few they actually let live. All of this is just an excuse to show a lot of gore, silly humour and well staged fights. Men (and one really hot female ninja) in plastic armour fighting rubbermonsters. Now, where do I know that concept from?

Ok, so the movie has and will get a lot of shit because of some very silly humour, but as I stated earlier, that is beside the point. This movie is for people like me, lovers of rubbermonsters. You should watch this for the same reason as you watch Ultraman, Godzilla or Gamera. Because you sleep and breath rubbermonsters. If you aren't into that, then you can stop reading this review, make a mental note to never watch this movie and go back to that dvdbox of the X-men movies that you have been meaning to watch for the sixth time. But, if you are like me, you will love this. There are ninjas fighting men in rubbersuits, men in rubbersuits tearing people in half and stomping on heads and an incredibly hot female ninja doing justice to a very pretty and tight black tracksuit. Lovely. To use that old expression, it's like cotton candy for the brain. Not healthy but incredibly sweet and yummy.

If there is anything to bitch about when talking about Alien Vs Ninja it would be the fact the the movie has a rather low budget. It's set in a forest for most of the movie and the digital effects arent exactly top of the line. On the other hand, they are still effective and never spoils the entertainment. Very recommended viewing. For rubbermonsterlovers. And people who like ninjas.
Upplagd av Jocke Andersson kl. 18:36