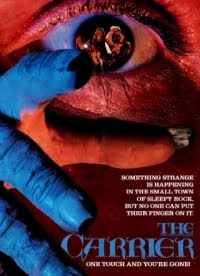 Uh. What the hell did I just watch?

Ok, try to follow me here... the main character is a young boy living in a small town straight out of your average Stephen King novel, an outcast accused of causing the fire that killed his parents. He lives in a small rundown shack on the outskirts of town and during one cold night he is assaulted by some sort of strange creature that he manages to kill but not before being injured by its claws. This, naturally, infects him with some sort of disease that makes everyone he touches dissolve into a puddle of goo. Actually, every inanimate object he touches gets infected as well. This causes quite a big panic and after the only bridge leading into town is destroyed, people start to take things into their own hand, factions appear and everyone starts wearing plastic to avoid touching anything infected by mistake. When someone realize that cats can sense the infection the conflict heightens into a battle for ownership of the towns catpopulation.

Uh, yes. How's that for a plot? But the damndest thing is that it works just fine. The idea of the movie is frankly fucking brilliant, mindboggling in a good way. To actually manage to make a coherent movie out of this is pure genius. The budget was obviously low and some of the acting is rather amateurish but it still works just fine. The sheer spectacle of watching all these people walk around covered in plastic sheets like straight out of a low budget Italian postapocalypse movie, killing each other over who gets to own a cat is entertaining in itself.

Seriously, I dont know what else to write. This is weird shit. In an original, good way. The low budget and the nonprofessional actors keep it from reaching classicstatus, but as an experience it's so way out there that you really need to see it, without ever going into some strange arthouse mode. If only for the fact that you'd have a blast describing the plot to your friends. Think of it as Stephen King crossed with David Lynch. And face it, it's a movie about people melting. Come on. The sight of a naked woman melting into shards of broken glass make it worth watching. So buy it. Now.
Upplagd av Jocke Andersson kl. 11:20