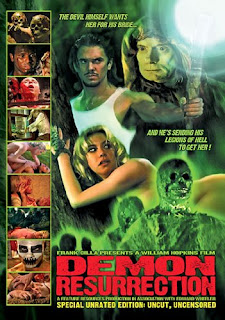 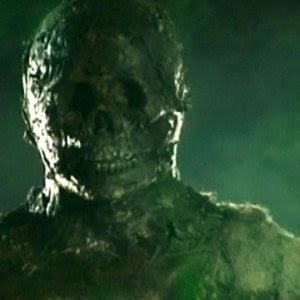 Isn't it nice when a movie delivers? You dredge through movie after movie of lowbudget uninspired dreck, made with only fragments of talent just to find some entertainment. You know, some decent gore and some gratitous nudity. Oh, and some decent plotting. I have spent a lot of time being dissapointed with movies that show some promise but in the end just boils down to being a chore to watch. Which means it is especially fun to watch a movie that doesnt dissapoint. Like William Hopkins Demon Resurrection.

The plot of this movie feels like it's taken from a 70s horrormovie, complete with evil satanists, greatlooking zombies and vengeance from beyond the grave. A group of people go out to a house in the woods to do an intervention, they believe her new boyfriend has gotten her hooked on drugs or worse. Problem is, her boyfriend is an occult writer and to help him, she joined a satanic cult for purposes of research. But, the cult got her hooked and soon she was used in a ritual to bring forth some evil creature. Yes, raped by ethereal entity. Every good movie should have a scene like that. She managed to escape but is now pregnant with Satans spawn and the cult want her back. So, naturally, they resurrect a bunch of ancient corpses to go get her. Let the fun begin.

First of all, the plot may look a bit silly on paper but it really works in the context of the movie without never feeling corny, thanks to some decent acting and those fun zombies. Ok, so some of the actors arent exactly oscarmaterial but the leads take the material seriously, especially Alexis Golightly as Grace, the lady pregnant with evil and the fact that she has several nudescenes only makes it even better. But the best part of the movie is the zombies. These nasty fellas look like they are cousins to the etruscan nasties in my favorite Italian goremovie Burial ground. Oh how I have longed for zombies to look like that, and Demon Resurrection has them in droves. It isnt the goriest movie ever made but we do get several fine gorescenes, torn out throats, glass shards that slice up bodies and other fun and red yums. The movie is shot on digital video without any major processing but looks way better than most movies with a similar budget. All in all, Demon Resurrection is a great exploitationflick made with a lot more flair that you would expect from looking at the dvdcover which makes it look like another Andreas Schnaasmovie. I really look forward to see what William Hopkins does in the future. Recommended for all gore and zombiefans.