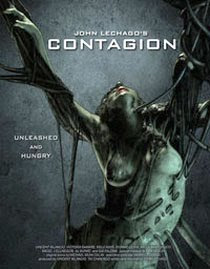 I think there is some sort of international law out there that simply states one thing: Blobmovies are always good, and making it illegal to give any of them a negative review. I havent found any documentation that proves its existence but some day I will find it. Until that day, here is another blobmovie full of gooey fun!

Contagion does not exactly have a big budget, the story is limited to about two different rooms. But, one of them is an apartment where a dirty old man is shooting porn which gives you the required quota of nudity that a decent movie has to have. Our lead character is an alcoholic painter living in the room next to it and when a female friend appears with a strange suitcase he cannot resist to open it. You know, when a suitcase contains warning signs about not releasing a contagion you should bloody well leave it alone. But, on the other hand, we wouldnt have this movie if he didnt. The titlecreature is released, some sort of black slimecreature that starts to eat its way through the cast, taking over their personalities and, well, eats more people. What more do we need? Nude women possessed by an ancient blobcreature? Check. Characters drinking paintremover in an effort to save the rest of the cast? Check. Lots of goo? Check.

Contagion feels somewhat similar in tone to the NY ratzombiemovie Mulberry street, in that it's set in a couple of rundown, crappy apartments with characters on the poor side of town, giving it that little extra bit of realism that helps the movie overcome some of it's more corny choices of dialogue and the very uneven acting. But let's face it, we dont watch a movie like this because we want to learn something about the darker side of man, we watch it for the blobs and the boobs! And that is what this movie does best! The blob effects are simple but effective without too muich resorting to bad cgi, which makes me rate the movie higher. You also have to give the filmmakers credit for managing make a decent movie that is basically set in one room. It takes at least some talent to pull that off.

So, all in all, a decent blobmovie. It has flaws but also a great deal of slime. Which is enough for me.
Upplagd av Jocke Andersson kl. 18:27