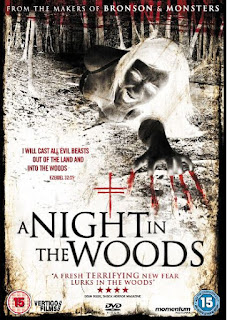 I am one of the few people that haven't given up on the Found footage genre. It is a tool of producing horror on the cheap that if staged right can be very effective. When made right we get the good stuff like Cloverfield and last years Evidence but we also get the kind of stuff that really give the genre a bad name, the kind that makes me join the chanters of hate. Like A night in the woods.

Brody (Scoot McNairy from Monsters) is an american living in the UK who has quite a fixation with filming every little part of his life, much to the chagrin of his girlfriend, Kerry. When they go on a camping-trip to Dartmoor they bring along her male cousin, causing a lot of tension (for reasons we learn later on). The audience realize pretty early that they aren't just cousins, but Brody has already taken to disliking him. After watching the trio bicker for more than half of the movie night falls, Brody vanishes into the woods, Kerry starts to make up for lost time with her ex in one of the tents and soon weird things start to happen, possibly related to an old legend of a hunter that hunts and executes sinners. Not that you actually care about any of it, that train left pretty early.

If you want an audience to enjoy your movie there are a couple of rules. The most important one, in my opinion, is to have characters that you root for - characters that you actually want to survive whatever ordeal you put them through. A night in the woods totally fails in this regards. It tries to develop some sort of triangular drama between the three main characters but all we get to see are psychopathic tendencies. Brody, who I suppose is to be the hero of some sort is just a disturbed voyeur with a previous history of abusing women. Kerry, who obvious has some mental issues, has no qualms about bringing an ex on their camping-trip  lying to her boyfriend about it and then goes on to jumping in the sack with the "cousin". Leo the ex is an asshole who is shown breaking into his ex:s home when she is not around and just being an all-round dick. All these ingredients, combined with an awfully slow pace, proceeds to almost kill all the fun for whoever poor sap that decides to watch this. It does get a bit better after 45 minutes, when the horror elements start to kick in. The last half hour is a decent experience with a well shot chase scene in the dark but the ambiguity of the whole thing combined with the totally uninteresting script makes it really not worth watching. Found footage at its dullest.

Too bad, since the location is truly awesome - one of those forest straight out of a fairy tale full of moss covered boulders and gnarly trees with branches that look like they would pluck you off the ground any moment. This actually gave me some hope for the movie but in the end all we get is a shitload of running about in the dark with shaking cameras held by people we really want to die so that the movie can end. Watch something else instead.
Upplagd av Jocke Andersson kl. 23:55