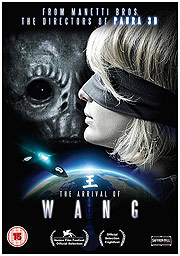 Gaia, a young Italian woman working as a Mandarin translator gets a phone call about a well-paid job that has to be done immediately and in great secrecy. She is picked up by car, blindfolded and taken to an undisclosed location where she is to act as a intermediary in an interrogation. The whole setup is strange from the start and she is taken into a dark room, not allowed to see the person she is supposed to translate and the interrogator is more than a little aggressive in his questioning. She finally has enough and demands to see who it is she is talking to, and the man reluctantly agrees. It turns out, to some major discomfort and quite a bit of panicking, that the subject isn’t actually a human but a tentacled alien with the name Wang who only speaks mandarin (since it is the most spoken language on Earth) to make communication easier. Wang states that his mission is only of peace and exchange of cultures but the interrogator refuses to believe him and torture is soon brought into the picture, much to Gaia’s dismay. Why is Wang here? Is Wang as peaceful in his intentions as he claims to be or is the interrogator right with his brutal methods?

Antonio and Marco Manettis L'arrivo di Wang is what I call classic Sci-fi, pretty much nailing the feeling of your favorite sci-fi novella or one of the better Outer limits episodes. A breath of fresh air actually, going back to old school pulp and although there are some budget related limitations (mainly some of the special effects), the concept works really well due to a well written script that keeps you intrigued throughout the entire movie, culminating in one of the best final lines in years. The script could have used some trimming, there are some parts toward the end that feel a bit "filler-ish" and going back to the Outer limits reference, this would have been a perfect 50-60 minute tv-episode. Don’t let that detract you from watching this, L'arrivo di Wang aka The Arrival of Wang is good stuff with some solid acting from the leads and a well animated tentacled monster, something that could have killed this movie from the moment he was shown. The reason I picked up this movie was the fun setup and it pulls it off with gusto, especially since it is mostly set in the interrogation room. Well written old school sci-fi, you know you want it.