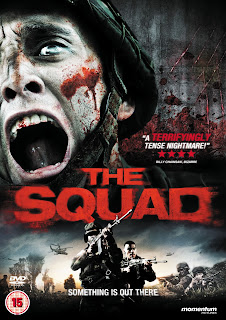 Trailers, dont you just love them? The way they can lure you into their world, making you believe that what you are about to watch is an entirely different experience than you are getting. Colombian movie El páramo aka The Squad is a perfect example of this, with a trailer promising some sort of supernatural military horror and when end up with something not quite so. Or do we?

A squad of nine special forces soldiers are sent up into the Colombian mountains to investigate a remote military outpost who hasn't been heard from in several days. A guerilla-attack is suspected so tension is high. Upon arriving they find that the whole crew is dead or missing, and this is where paranoia sets in, everyone expecting guerilla soldiers sniping at them any moment from the surrounding mist-shrouded mountainside. The situation changes however when they find an insane woman behind a bricked up wall filled with wards against evil. Then a logbook is found, one that implies that the woman is a witch and has brought a curse upon them. Some of the soldiers believe that she is behind the deaths of the crew and when she escapes and a soldier is found dead, mayhem ensues.

I was really hoping for, as the trailer suggested, a tense supernatural horror where the soldiers go up against nasty supernatural creatures but this is not what The Squad is about. Instead we get a nailbiting psychological horrormovie where the threat remains somewhat ambigious throughout. And that's the beauty of this movie, if you are into this kind of horror and can accept not getting every single answer spelled out for you in capital letters, i e: THE BUTLER DID IT. We never really know who or what is causing all of this, is there some kind of supernatural prescense here or are the soldiers going insane? The woman is real, but who is she? Is she the cause of the deaths or are the soldiers just seeing things where there arent any? People start to die, sometimes by unknown causes and sometimes by the hand of a former comrade. Sure, there are more questions than answers here but the mood and atmosphere is as bleak and full of dread as it is here, it doesnt really matter. Your mind is prefectly capable of making up what might be in the blank spaces (And if it isn't, then you should be watching Transformers 3 instead). The locations are striking, the armybase on a small mountain peak surrounded by trees, rock and fog, all shot in a lovely grey palette with the corridors of the base itself dull with streaks of red from the former crew.

Ok, enough praise now. Not everything works. The actors are all fine and decently sketched out as all coming from different parts of Colombian life. The problem is that all are dressed in the same dirty military garb and are at times, mostly in the beginning, somewhat hard to tell apart. This gets better as the movie slows down after the first really tense 30 minutes but if you arent paying attention it will probably get a bit annoying. The ambigiuty of the whole thing can be stumbling and the ending just might kill the movie for you, I'll leave it at that. Personally I found it good, if somewhat cliched, but I can see why people arent liking it. But other than those small flaws I cant do anything else than to recommend this, Jaime Osorio Marquez has crafted a tense movie with more atmosphere than most movies I've seen in the last year or so. It's just too bad that it is marketed as an entirely different movie than it really is. I mean, just look at that dvd cover.
Upplagd av Jocke Andersson kl. 17:07