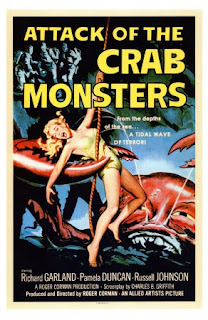 Roger Corman is awesome. If you're reading a blog like this, chances are that you are already fully aware of that fact but I just wanted to remind you of the fact. Todays evidence is the wonderful little movie Attack of the Crab monsters, a title that tells you exactly what need while still having a plot that is way more intelligent than you would expect. 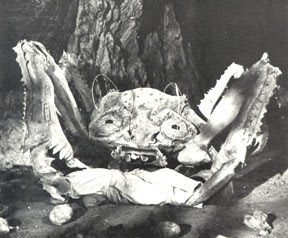 What a magnificent specimen.

Agroup of scientists arrive at a small island to find its previous occupants missing. While inhabiting the house the earlier people lived in they realize that something strange is going on. People start to go missing and their disembodied voices are heard in the night. Yes, its crabs. Not that crabs (sorry, I couldnt resist) but giant mutant crabs that assimilate their victims intelligence and speak with their voices to lure the survivors to their doom, all while reducing the island to swiss cheese by digging tunnels.

The movie was made for $70000 and this shows, mainly in the rather limited outdoors locations, but the quality of the script outweighs this by far, especially with the scenes of the crabs trying to lure the next victim out for a midnight snack. The acting is a bit stiff and hysterical, but that is fairly common with movies from this era. Roger Corman directs with a pace that never lets you be bored and the crabs? The movie is from 1957, crabs looked like that back then. All in all, this is a fine piece of monstermovie for all the fans of the genre.
Upplagd av Jocke Andersson kl. 13:27