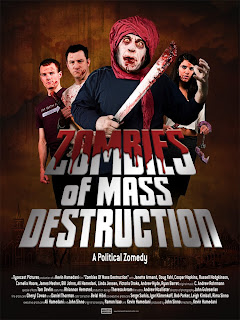 One thing that may anger me greatly is when the female lead in a lowbudget horrormovie doesnt take her clothes off. For a horrormovie to succeed there has to be a large amount of well made gore and copious amounts of nudity, it's as simple as that. A good director, a well written script and some good acting might help too, but in the end it exploding heads and tits that I want. Which makes this movie even harder for me to review of course. Not that it is some kind of exceptional movie, Zombie of mass destruction is really "just" Above average, but the direction is decent, it has an incredibly cute lead actress (the gorgeous Janette Armand) who refuses to show herself in nothing less than her underwear and has a script that actually tries to say something about racism, US politics, religion and homosexuality, even though most of it isnt exactly subtle and very often is disguised with jokes. My main gripe with this is that I kind of feel like an asshole when I bitch about wanting more boobies. I'm not used to watching movies with messages. With that off my chest: Who am I kidding? I want more naked breasts!

Janette Armand plays Frida Abbas, a young Iranian girl living with her father in a small Island town outside the coast of America, having just dropped out of school. At the same time a young man arrives in town with his boyfriend with plans to let his mother know that he is gay. While he tries to get the guts to tell his mom and Frida tries to dodge the typical small town racist thoughts that she might be a terrorist, what do you think happens? Well, if you read the title you realize that there will be a zombie outbreak and our character desperately trie to survive. Yes, we've seen it all before.

And that is what this movie is all about. We have seen it all before. The plot is old and the satire is obvious, however well intended. But with that said, I would still recommend Zombies of mass destruction to all fans of zombiemovies for a couple of reasons. It is a decent horrormovie with a somewhat slow buildup to a rewarding last half and it has huge amount of ripped out throats, exploding heads and other fun stuff with excellent make up effects. The actors seem to have fun with their roles and most of the jokes actually work, however crude they might be from time to time. In short - if you like zombiemovies you will most likely like this.
Upplagd av Jocke Andersson kl. 09:20