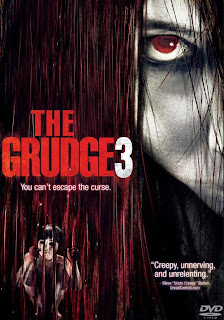 Ok, call it quits now. You have officially killed the franchise now. I liked the original Ju-on movies, even the lowbudget tv-movies back in the days when asian horror wasnt just all pale women with long dark hair. The first two american remakes were ok, mostly for the fact that they were directed by the very same creator of the original japanese movies. But Grudge 3... this is the kind of sequel that exemplifies the reason why sequels are hated, the kind of sequel that would make any Children of the corn part shun it. Yes, the curse has travelled to the US now (well, Bulgaria or some other easteuropean country) and has infested the house in The Grudge part two. Oh, nasty. Especially since there are about four tenants in the house and it takes 90 minutes to kill all of the them. The scares are strangely unscary and telegraphed way ahead - my girlfriend, who normally gets really scared watching movies like these, was strangely indifferent. Yes, she jumped at the right moments and looked away when something "spooooky" was happening, but usually she gets mad at me for forcing her to watch movies like these. When The Grudge 3 was over, it was like nothing had happened.

No, keep away. Dont watch it. Ok, the director of the fun parasiteflick Splinter got paid doing it, but that is about the only positive thing I can think of. Not even he can do something with this script. Most likely the most boring and unspiring sequel ever.
Upplagd av Jocke Andersson kl. 14:00