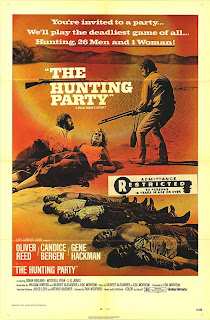 The Hunting party is a movie that never will win any prices for political correctness. I truly wonder, who was the intended audience for this? I mean, one of the things you learn from this movie is that rape is okay, as long as you give the lady peaches afterwards. Oliver Reed stars as an outlaw in the old west who decides that he wants to learn how to read so his gang kidnap a young schoolteacher (played by Candice Bergen). What they dont know is that she is the wife of psychopath millionaire Gene Hackman who gets pretty upset and decides to hunt down the kidnappers with his scoped, highpowered rifle and make them pay. What he doesnt know is that Candice Bergen (after being raped and given a can of peaches) has fallen in love with Oliver Reeds character and when he finds out, yes there will be hell to pay.

There is not a single truly "good" character in this movie. Oliver Reed, the hero, is s rapist and his gang would like to to the same thing to the woman. Gene Hackman, who I suppose actually has the right to be upset, is a sadist who likes to torture prostitutes while he is away from his wife, and while his posse does protest somewhat to the idea of shooting people who doesnt have the chance to shoot back, they still go along with it. You realize pretty quick that there wont be any happy endings here.

Ok, so who am I kidding?! I love this stuff. The Hunting party is full of graphic violence, gigantic squibs and with all the fun actors around like Reed, Hackman, Simon Oakland and L.Q Jones, there is never a dull moment. So the morals of the story might be a bit... depraved... but who cares? This is grand entertainment!
Upplagd av Jocke Andersson kl. 16:35