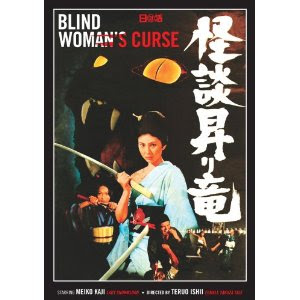 From the moment I received this dvd I knew that this was something I would like. Starring the great Meiko Kaji and directed by Teruo Ishii with a plot that mixes horror, grue and swordplay, how can you fail? But for some reason it took me several attempts to finish the movie, not because it is bad or boring, but instead the fact that I think I'm just a bit bored with movies lately. I should just watch big budget trash instead, not fine movies like this.

Meiko Kaji plays a young member of the Tachibana clan who is having a rather rough time at the moment. Another clan is secretly plotting their demise and is getting help from a mysterious blind woman and her hunchback henchman. Soon, young girls of the clan are found dead with their back tattoos removed and all of this points back to something Akemi did five years earlier, placing a curse on her.

Yes, this is good stuff.

S1wordplay, blood geysers and Meiko Kaji. You cant really go wrong with that. But as I mentioned earlier, the first half of the movie was really hard to get through which is a shame, since this is prime Teruo Ishii. His wild imagination with the camera and the setdesign really shines from time to time. Fortunately the last half ups the violence and fun stuff to the point that I (momentarily) had to drag myself out of that damn rut. This is something that every fan of Teruo Ishii, Meiko Kaji and japanese genremovies will like. I would even recommend this to the lovers of the more violent and fantastic Shaw Brothers movies of the eighties. Someday I will watch this again when I can appreciate it to the fullest.
Upplagd av Jocke Andersson kl. 20:00