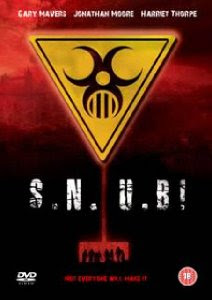 I hadnt heard of this movie before I surfed onto play.com:s webpage and found it under horror. Reading the story, I realized I had to have this movie and bought it without reading any reviews or watching the trailer. I like to take a chance like that from time to time. I cant really say I was that dissapointed, S.N.U.B isnt a bad movie. The only problem is, the back of the dvd reveals waaaay too much of the movies plot and lulls you into thinking this is some sort of cool zombiemovie, when it really isnt.

A weasly lower politician somehow founds out that a terrorist threat is about to happen, a nuclear bomb has been found in central London and he manages to bully his way into a S.N.U.B (a Secret Nuclear Underground Bunker). The unimaginable happens, the bomb goes off and reduces London to a radioactive wasteland leaving the survivors to fend for themselves. But when a couple of soldiers go out to try to repair a radiomast, they are killed by something unknown and... well, here is the problem with the synopsis on the dvd, it tells way more than that, event that doesnt occur until about 50 minutes into the movie which is pretty lethal for a flick that is only 77 mins including the end titles. Yes, there is a little grue and some nasty creatures towards the end but this movie is more about the buildup to that event and the paranoia and fears that the survivors have. In a way, this feels like it would fit in on BBC a friday night on a scifi/horrorspecial, like those classic tv-movies and serials that Nigel Kneale wrote ages ago. Not that this is any way near as good as that. S.N.U.B actually manages to drag a bit which is a mean feat sincve the movies is so short. The characters are fairly clichéd and underwritten(though decently acted in that british tv kind of way) and the script should have been looked over a bit (one of the characters mysteriously vanishes two thirds into the movie never to appear again. Either victims of poor scriptwriting or poor editing?). On the other hand, the movies makes good use of its locations and the special effects of the nuclear explosion and its aftermath are surprisingly effective, considering what was obviouslt a very low budget. Perfectly watchable as a lowbudget scifithriller, just dont read all the way down on the dvdcover and expect the gorefest its trying to trick us into believing that it is.
Upplagd av Jocke Andersson kl. 13:30