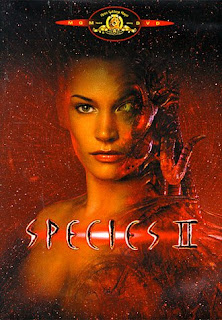 I believe that one day there will be a national holiday in awe of Species 2. Not too many year have passed for the movie to become the cult that it desperately needs, but it will come. Rest assured, it will, for spectacles such as this are rarely created. The sequel to 1995:s fun monsterflick Species has everything you need:

Copious sex and nudity as a Martian astronaut brings home a strange infection which makes him try to mate with just about everything. After the act we come to the violencepart as the poor womens bellies are ripped open as an alien child is instantly born. There are tentacles involved too! Natasha Henstridge returns as a "good" alien this time and dont worry, she has nudescenes. The movie is also full of really good actors such as James Cromwell, Michael Madsen (before he started to appear in just about anything), Peter Boyle and a couple of other familiar faces. The dialogue these people are forced to mouth is among the most preposterous yet and you actually feel sorry for them. Peter Medak, a true professional, does what he can with what appears to be a fairly limited budget and the script from hell (by a guy whose previous experience includes writing Beverly hills 90210.) and the movie still looks good, with a bunch of fairly good digital gore (for the timeperiod) and a final creature that looks like H.R Giger designed a muppet.

You cannot hate a movie like this, in ten years this will appear on doublebills with Bruno Matteimovies and the audience will love every single moment of it. I long for that day.
Upplagd av Jocke Andersson kl. 16:10