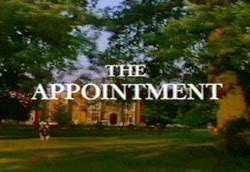 Lindsay C Vickers The Appointment centers around some kind of evil force that kicks off by killing a young girl taking a shortcut through a park (A truly, truly, truly awesome sequence). Three years later, we meet a family living near that very park. The young daughter is going to perform at a concert and dad (Edward Woodward) is just about to tell her that he cant make it since he has to go on a workrelated trip and this is something the somewhat fatherfixated young lady wont like very much. All fathers reading this, take heed. Go to your daughters concert. She gets VERY upset and that night dad has a very nasty dream about him dying in a carcrash. To make things even weirder, some rather odd things start to happen. A pack of dogs gather around the house, people move around in photograps but dad doesnt take thsi very seriously. Dumb dad. He starts his journey the next day in his car, and slowly and methodically the evil force starts to lay the puzzle, managing the events that may lead to the dream coming true.

The major issue with The Appointment is that it is so damn slow. Things happen at a regular pace but that pace is carefully calculated to be as droning as possible. It all leads up to a satisfying ending and is far from a waste of time but it does tear at your patience from time to time. In a weird way, that very flaw is also the strength of the movie. It feels like you are watching a nightmare that there is no chance of escaping from before it smashes you in the face, waking you up. Issues with logic never really matter. It starts out in an exceptional way with the sequence in the park (which is on youtube. Link) with the young girl walking in the park, suddenly hearing a girls voice calling for her from a nearby patch of forest, all while something entirely different is following. Well, you should watch the clip yourself, it is truly exceptional. After that we are slowly introduced to the dynamics of the family. The relationship between father and daughter feels a bit odd to say the least, you get a slight feeling that there is more to it than meets the eye. There is a somewhat strange scene where Edward Woodward is standing outside his daughters room, debating whether he should enter while she is sitting on her bed waiting for him. I may be reading too much into this, but it does darken things a bit, making the whole experience more uncomfortable.

Technically the movie is excellent, there are quite a few great scenes that I wont talk about here since I would spoil the fun but I can assure you that the direction and the cinematography are fine. Acting is just fine, I mean you cant really fail with Edward Woodward. The daughter can be a bit stiff with some of the lines but nothing major.

The Appointment is a quirky flick which has been compared to Dont look now, something I agree with, they both have a similar uncomfortable mood. It is slow, paced like a snail but you get out of it with a pleasantly(?) uncomfortable feeling in your gut, the same one as when you wake up from a nightmare and realize that it was a dream. The pros most definitely outweight the cons here. Recommended
Upplagd av Jocke Andersson kl. 18:00