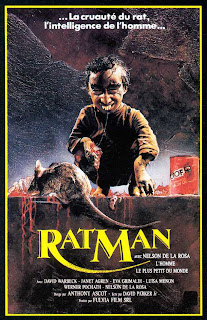 Wow. What the hell is this?! Well, the answer is actually rather simple. Pure and simple exploitation for the purpose of making money. Just like I want it.

And what a plot! A mad scientist has in his tropical island hideout managed to create a rat/human hybrid (played by Nelson De La Rosa, the shortest man in the world when this movie was shot). No hybrid of any kind who has some pride in his work can remain in the laboratory and promptly escapes. While this is going on a couple of models and their photographer end up at the scientists place. To make this even better, David Warbeck (dubbed) and Janet Ågren are roaming the island looking for Janets missing model sister who may or may not be one of the models in the first plot strand. You never really can tell because the Warbeck/Ågren part of the story feels like its taken from an entirely different movie. Ok, so who cares about that? What is important is that the Ratman is crawling out of toilets to kill people.

This is wonderful. The plot is enchantingly random, spiced up with fun gore, a heroine whose boobs are constantly almost falling out of her clothes, long totally unmotivated showerscenes (who am i kidding? There is no need for motivation when it comes to nudity) and the lovely little creature played by De La Rosa. I imagine that the script was written under the influence of a lot of alcohol and/or drugs and the low budget and poor production values doesnt exactly help with that. But to the movies defense, this is a perfect example of italian exploitation as I like and love it. Cheap, cheerful, violent and always entertaining.
Upplagd av Jocke Andersson kl. 08:00