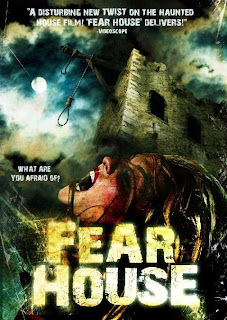 Have this ever happened to you? You muck around on the internet on various moviesites and happen upon a movie with a really nice dvdcover. You let your guard down, read a couple of reviews and focus on the positive things. You have already decided that this is a nice movie. The negative reviews are ignored because you like the plot. Fear House isnt a movie that has been universally panned but it has gotten its fair share of bad reviews. Is it a bad movie? Nope.

The story isn't anything special, we've seen it before but thanks to decent craftmanship and a nice mood we get 86 cozy minutes of dread. Fear House has the usual characters who all end up in a house with some sort of evil spirit roaming its halls. A young female writer buys the house out in the desert and when her friends and family hasnt heard from her for some time they visit the place to find out why. And start to die one by one. Killed by the things they fear the most. You know. A really corny concept that I never really liked in any movie.

But thanks to good direction, a well written script that takes good care of its cliches and some decent acting, Fear house overcomes its looming iceberg that could have dropped it to the bottom of the straight to dvd ocean. There is actually some decent tension from time to time with one or two really atmospheric scenes and a couple of juicy makeupeffects without turning into a straight gorefest. From time to time the studiobased location is too obvious but that is never a big issue. So, nothing we havent seen before, but better than most of its similarily budgeted peers and the filmmakers do show a bit of talent and especially love for the genre. Keep your expectations in control and you just might come out of this entertained. And the dvdcover is really nice.
Upplagd av Jocke Andersson kl. 14:40