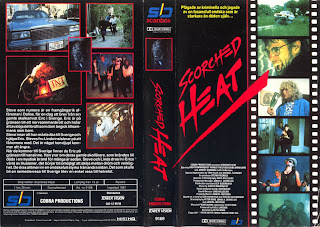 I have seen things you people wouldnt believe. Satanically possessed turkeys wearing human faces, herds of giant killer rabbits feasting on human flesh and Kevin Costner slumming it in Dragonfly. But nothing prepared me for this.

Scorched heat is a swedish horrormovie, one of the few. It was obviously meant for an american market since the characters all speak english. Very poorly. VERY poorly. One of the leads, Harold "Harald" Treutiger, is now a somewhat famous tv-presenter in Sweden who for some reason doesnt list this movie on his official website. His performance is the worst I've seen since I first laid my eyes and ears on Andreas Schnaaz abomination of dubbing, Zombie 90: Extreme pestilence. There is a classic scene where Harald breaks down in tears which most likely would drive people insane by just watching, I know I lost a few braincells. Most pornflicks have better acting than this.

The plot isnt half bad actually, dealing with the return of a dead teacher which our heroes accidentally killed in their youth and along with a groovy score really has that 80s feeling. The teacher tends to appear as a burnt husk of a corpse which actually looks ok, and some of its appearances have a slight resemblance of cleverness but it doesnt matter, Haralds "acting" overshadows everything. You sit there for an hour trying to focus on the movie (which truly is impossible) and at the very moment you decide that this movie could have been ok if it werent for Harald, the filmmakers bring in the bikers. Yes, the lamest bikers ever, they look like someone is trying to do an imitation of a metalband, but dont really know how to. Even Mad Foxes had tougher looking bikers.

Here is a fun little highlightreel. Why doesnt Harald have this movie on his resume, I have NO idea...

I guess this really was a half-decent try of doing a americanstyle horrormovie in Sweden, as low budget horrorflicks go I have seen worse. But none of them had Harald Treutiger. He really is THAT BAD. I can seriously say that I have NEVER seen any worse acting. NEVER.
Upplagd av Jocke Andersson kl. 07:47