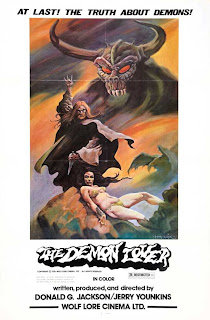 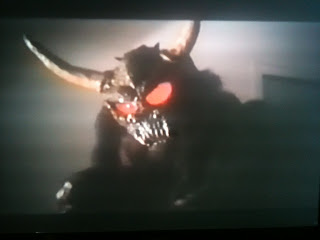 Anyone out there popping in to this blog from time to time will realize that I am somewhat of a fetischist, not only for rubbermonster but also for good old 70s exploitation. A movie I've been wanting to see for ages now is Donald G Jacksons The Demon lover, a flick I read about 25 years ago for the first time but never got around to seeing, mostly due to the fact this only has been available on vhs. For some mysterious reason I decided that now was the time to finally see this and managed to get hold of a rip off a vhstape, of course in fairly atrocious quality and to make matters even worse, I watched it on a 46" tv. The image was blurry and pixelated and the sound tinny.

It didnt exactly help that the movie sucked ass.

In short, The Demon lover is a movie with a few interesting ideas but is full of inept camerawork, poor acting and completely useless scenes just to pad the movie 10 75 minutes. I like the basic story, a satanist (with a naziflag in his place just to make him more evil. Nazisatanists are cool) who gets mad at his coven (I use the word coven very loosely. They just seem to hang around at his apartment doing hippiestuff) when they dont take him seriously so he decides to conjure up a demon to kill them all in various bloody scenes. While he is not bringing forth demons he goes to his local karateclub and a bar just to beat people up, the useless fillerscenes I was talking about. And then there is that demon. It's pretty cool, in a cheap way. It looks like they tried to make their own version of the beast in the 1957 Jacques Tourneur classic Night of the demon but failed miserably, making it look like some kind of plastic toy. No, scratch that, it looks like the Ro-man in Robot monster with glowing red eyes and horns, rumbling around like a bear with arthritis. It speaks in a barely intelligble reverbdrenched voice and possesses some of it's victims and makes them kill a friend or two. The movie is entertaining as soon as he is around or some other killing is being done, but the rest of the movie (Pretty much most of it) is just plain poor filmmaking set to a crappy synthscore. There is some bloody violence to keep us entertained but I dont really know if it is worth it. I suppose you could watch it for a laugh but there are a lot better ways to spend your hard earned hours off.

The poster is truly awesome though, I need to gets meself one of those.
Upplagd av Jocke Andersson kl. 12:00