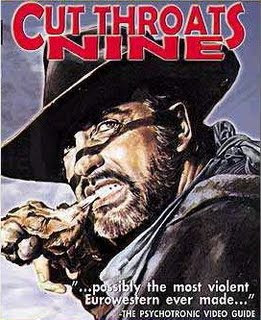 I can imagine the moviemakers having a meeting before the shoot, before a script is presented. They want to make a western, that has been decided, but the writer is seething with anger. He has probably just gotten through a nasty divorce and is angry. They want a movie without heroes. They want everyone that dies to die in the most brutal way possible and the mood should be uncomfortable and filthy.

Boy did they succed.

A group of soldiers are on their way to a fort with a number of chained convicts sentenced to hard labour for life. On the journey they are attacked by hoodlums who are convinced that the group has a shipment of gold with them, but they manage to escape, well most of them anyway. Our "hero" Sgt Brown, his young daughter and the convicts. Now they have to flee through a snowy mountain landscape and when the convicts realize that their chains in fact are made of the gold that the robbers wanted, plans to escape are made. A life is not worth anything out here.

This is a very harsh and brutal movie, you can belive that. When Sgt Brown is forced to watch his daughter get raped about halfway through you get a slightly sick feeling in your stomach while realizing that is was sort of inevitable and makes you wonder why it took this long for it to happen. Every single character is a coward or a psychopath, the environments are cold and dirty and all the violence cruel and detailed. This is helped a lot bu some good acting, in spite of the dubbing, and the locations are perfect for a movie like this. Director Joaquín Luis Romero Marchent does an excellent job on an obviously low budget (most of it is set outdoors, no need for expensive sets) and sometimes you feel the same chills as the characters are feeling as they drudge on through the snow, killing each other off one by one. The music feels like it was lifted straight out of a horrormovie but actually feels rather appropriate with its unsettling choirs and dark tones.

A very bloody and brutal spanish western with lots of burning, shooting and disemboweling, perfect for a cozy evening full of carnage and mayhem with your loved ones. And Emma Cohen is in it. You cant really fail when she's around.

At the moment this flick is only available on bootleg dvd, but Code red will release this properly in september. An essential purchase if I ever saw one. There is actually even a remake in the works, with people like Harvey Keitel and Mads Mikkelsen involved. It could be fun, only time will tell. It would at least give the original some well deserved attention.
Upplagd av Jocke Andersson kl. 14:05