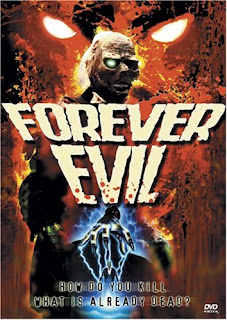 Sometime during the winter of 1990 or 1991, in the days when good film meant blurry vhsdupes of movies you only read about in Fangoria, a friend of mine and I had just gotten a shitload of tapes from a "contact" and decided to spend an entire weekend watching all of this. To maximize the mood we decided to go to his cabin in the woods and fortunately for us this was a good choice since this was one of those winters back when snow was a meter deep, temperature was a nicely dry -20 celcius and everything creaked as we put our feet on it. A perfect scenario for a movie. I really dont remember any of the movies we watched other than Giorgio Ferronis superior Night of the devils and Roger Evans Forever evil but had a weak memory of Forever evil being a creepy and rather nice movie. Now, the whole point of this little opening is to illustrate that even a mediocre movie can be ok under the right circumstances since that what was Forever evil really was. A mess of a movie with all the bad bits blurred by a nostalgic memory.

Ok, so it is not the worst movie ever made, far from it. To say that it is a good one is also not right, but at least it is ambitious. The first 30 minutes are actually quite decent, at least when you compare it to similar movie from the same era. We get to follow a number of friends going to a cabin in the woods and before you can say Evil dead ripoff all but one are dead and now the boredom begins. You see, it was the evil god Yog Kothag that behind the dastardly deeds and Marc, our hero wants to get even. He teams up with a young woman who experienced something similar and together they try to find out the truth about the resurrection of Yog Kothag, his undead realestatebroker henchman (who sounds like he used to work for the empire in Star Wars) and the zombie roaming around. Yes, just the one zombie.

Forever evil has no chance in hell of ending up on someones favorite movie list (unless he/she has the same memoryclouding issue as me and never did the dumb thing of watching it again) but I have seen a lot worse. The problem with the movie is that it is two hours long, two hours that start out well but descends into scene upon scene of badly acted filler interrupted by the odd gory dreamsequence. It isnt helped by the music that sounds like it is midiversions of pornmusic. The director does a decent job but totally overdozes on POV sequences, to the point of making you groan whenever the camera starts wandering again. The script is, as I stated earlier, ambitious and has an intriguing story, but is way too drawn out and massacred by a lot of not so good actors. If you manage to hold out unto the end you are rewarded with a decent ending with nice gore, but the road to it isnt easy to follow. I wouldnt really hold it against you if you stopped watching halfway through. Mostly for 80s horror fetishists. I do like the basic idea a lot, do a normal horrormoviescenario in the first 30 minutes and actually show what happens afterwards.

I have to mention one of the dreamsequences that to this day remains somewhat notorius where a pregnant woman rips open her belly and removes the fetus, a sequence that will ensure that the movie will be remembered in the future.

Ok, if you still finds this interesting you should go here where the writer of the movie talks about making low budget horror. He mentions a directors cut that only was available on vhs, but has since been released on dvd which was the version I watched. It has a very entertaining commentary track where the director and writer, fully aware of what kind of abomination they unleashed upon the unsuspecting public, go into lengthy detail about how the movie was made.
Upplagd av Jocke Andersson kl. 12:00